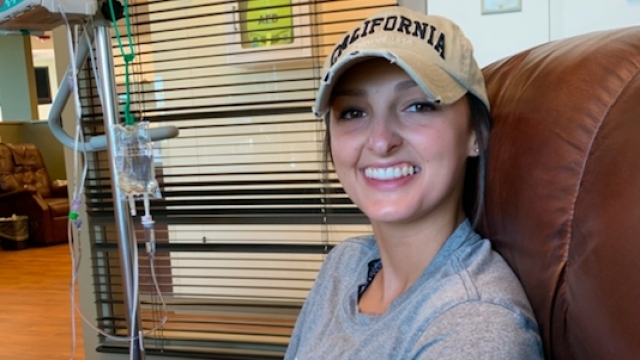 Madison Webb is part of a growing group of women: under 40, with metastatic breast cancer at the time of initial diagnosis.

Madison Webb, 22, was diagnosed with stage 2 B breast cancer earlier this year. Breast cancer in young patients is rare, making up about 10% of cases. But Madison Webb's situation is more common than it used to be. She is one of a growing group of women: under 40, with metastatic breast cancer at the time of initial diagnosis.

"I was active. And I honestly felt great. And it was just nothing was wrong," she told Newsy. "I didn't feel sick until symptoms. I didn't feel anything weird in my body. I honestly was feeling super healthy. And. It was just late one night that I was studying in March that by the grace of God, I even came across. It felt like a lump in my right breast. I [saw] four different nurses or doctors along the way [before being diagnosed].  I think it might have been because I am so young, that they just assume that the chance of me actually being breast cancer was probably slim."

"The incidence of breast cancer in women in their 20s is one out of fifteen hundred," Dr. William Lee, Oncologist and Hematologist with National Jewish Health told Newsy. "So it's really uncommon. So as in Madison's case, when a woman that young shows up to the doctor's office, they're not necessarily thinking this is a breast cancer. "

The majority of young women diagnosed with breast cancer find a breast abnormality before they're officially diagnosed. Experts say it’s because women under the age of 40 don't get regular mammograms, and even when they do, young women have very dense breast tissue that makes distinguishing tumors difficult.

"The mammogram can distinguish between cancer and fat. Cancer is a solid structure or, you know dark or gray, white structure on mammograms. Well, in a young woman, under the age of 40, their normal breast tissue looks very similar to that. So the mammographer has a little bit more difficulty distinguishing what is an abnormal finding versus what is normal," Dr. Lee said.

But there is a promising alternative that may help more women assess their cancer risk. In August, the government expanded its recommendations about who should get genetic testing for breast cancer. New research published in JAMA this month found multigene testing for breast cancer patients was also extremely cost-effective compared to other screening. The researchers say their findings support expanding genetic testing even further, to all women with breast cancer. This would be especially beneficial for minority patients.

"Genetic touching rates are lower in underrepresented minorities and women who are of lower socioeconomic status," said Dr. Susan Domcheck, Director of the University of Pennsylvania's MacDonald Women’s Cancer Risk Evaluation Center and Executive Director of Basser Center for BRCA.

But it's still not clear how effective expanded testing would be. Dr. Susan Domcheck says right now, the vast majority of young women still don't have detectable mutations in the genes that this testing targets. That includes Madison -- she underwent several genetic tests when she was diagnosed and says all of her tests came back negative.

Researchers are still looking for the causes of breast cancer in these individuals, to learn more about cancer risk for them and the family members who might share their genes.

Madison, meanwhile, has completed chemotherapy and has more treatment ahead.  She wants to use what she's learned along the way to help other women.

"The hardest part has been watching my body change of I think just as a woman. I have purpose and I have identity. And like I told you, that wasn't in my hair and my beauty or my age or in my athletic abilities. But it's the fact that God created me for a purpose and knowing that. These last few months weren't in vain. They weren't for nothing that I got to go through that and experience hard things so that I could come alongside women and hopefully young woman that who unfortunately will have to face this battle," she said.