Breaking Down The Unique Legal Knot Of The Texas Abortion Law 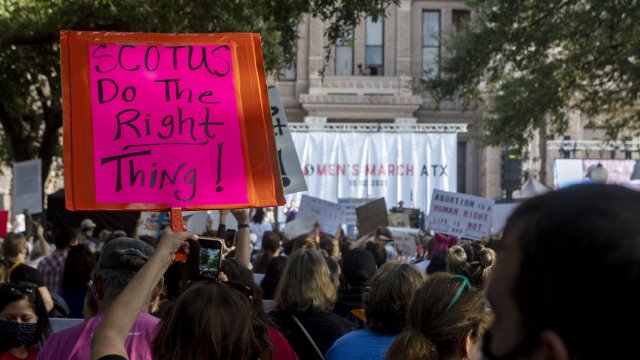 SB 8 is an unprecedented law that creates a "bounty" system allowing anyone involved in the abortion process to be sued, even for an incentive.

Earlier this month, the Supreme Court dealt a final blow to a federal challenge to the controversial Texas abortion law SB 8. The crux of this decision was determining who is actually enforcing the rule: the government or civilians.

Regardless of one's personal opinions about the bill, the implications of it are huge, and justices along the ideological spectrum noted this during oral arguments.

"Essentially, we would be inviting states, all 50 of them, with respect to their un-preferred constitutional rights, to try to nullify the law of -- that this Court has laid down I mean, that was something that until this law came along no state dreamed of doing," Supreme Court Associate Justice Elena Kagan said. "Guns, same sex marriage, religious rights, whatever you don't like, go ahead."

"When we decide a case, the rule that we establish should apply to everybody who's similarly situated, and if you look at the particulars of the enforcement mechanisms, they are unprecedented and they provide cause for concern," Supreme Court Associate Justice Samuel Alito said.

So, let’s unpack what those “enforcement mechanisms” are and what makes it so seemingly unprecedented.

The law’s unique mechanism works by making a type of “bounty” system. The law allows citizens to sue anyone involved in performing or aiding an abortion and the law even gives them a financial incentive.

If the plaintiff is successful, the law allows them to collect cash payments of $10,000 and legal fees from whoever was sued. If the plaintiff loses, they don’t have to pay the defendant's legal costs. What’s unique about this is the bill enables ordinary citizens to enforce the law and actually forbids government actors from enforcing it.

For the record, the people seeking an abortion can’t be sued, but providers and anyone helping can, down to a driver that takes them to an abortion clinic. Lyft and Uber have stated they will cover any potential legal fees for their drivers.

As a number of legal experts have pointed out, this seems to create a new way to circumvent any constitutional rights a state doesn’t agree with.

Michele Goodwin is a law professor at University of California Irvine and the author of "Policing the Womb: Invisible Women and the Criminalization of Motherhood."

"Now what this means more broadly for law are a number of things — one of which is that it means that a state can trump federal law, which is antithetical to everything that we've known in constitutional law and federalism, which is that when the federal government has spoken either through Congress or through federal courts and the Supreme Court, that that becomes the law of the land," Goodwin said.

Looking back through history, there is at least one historical example of laws that follow a similar bounty system — it’s actually the Fugitive Slave Laws leading up to the Civil War. Though this might seem like a wild comparison, there are more similarities than one might think.

The government offered a cash bounty for anyone formerly enslaved who escaped to a state where slavery was illegal. It also targeted anyone who aided and abetted a 'fugitive,' allowing slaveowners to sue anyone who helped an enslaved person escape. It also tipped the scales against them, speeding up the procedures and removing judicial oversight.

"Fugitive slave laws provided for this kind of citizen vigilantism, so if one thinks about why fugitive slave laws become important to this narrative, it has a lot to do with the failures of the Supreme Court and the ways in which states sought to strategize against the promise of equality found in the 13th, 14th and 15th Amendment," Goodwin said. "But the reason why there are the efforts to reframe the Fugitive Slave Act, reframe what we saw during Jim Crow is because it worked!"

Goodwin noted that some states tried to pass their own laws to protect Black Americans and override Fugitive Slave Laws, but they were unsuccessful.

Of course, the parallels aren’t perfect, but the historical example may give some insight into what might be next.

What might be more successful is a stronger move from Congress.

Congressional Democrats have been rolling out multi-step plans to protect the constitutional right to have an abortion if Roe v. Wade is overturned, from new federal protections, to reforming the Supreme Court, to abolishing the filibuster.

As far as SB 8 is concerned, the editorial boards at the LA Times and Boston Globe have called on Congress to stop this kind of civil enforcement law in its tracks before it spreads to other civil rights beyond just abortion. According to the Globe, Jonathan F. Mitchell, the former Texas solicitor general who helped write the law, even noted Congress might be able to solve this "by enacting the Women’s Health Protection Act, which would preempt SB 8."

"So, the Women's Health Protection Act is meant to codify Roe v. Wade, and it would be an important first step," Goodwin said. "It can come before Congress again, and I believe that it will, because this was not the first time that the Women's Health Protection Act has come before Congress, and it's unknown when it will be that time in which it will be able to successfully make its way through the Senate."

But while the legislative battle continues, the effects of the law are already being felt back in Texas.