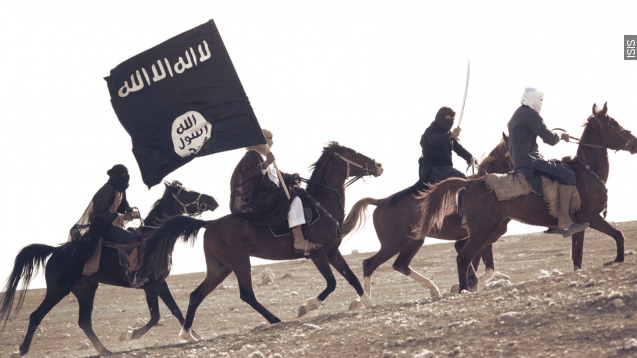 SMS
Breaking Down ISIS Propaganda By Its Source
By Jake Godin
By Jake Godin
January 15, 2016
ISIS propaganda comes in many forms — magazine, radio, "news agency." Here's a look at a few of them.
SHOW TRANSCRIPT

You’ve probably seen some of the more infamous ISIS propaganda videos by now — or at least clips from them.

But the terror group’s media strategy is a little more … expansive.

Take "Dabiq" for example. This is ISIS' English-language magazine.

While not exactly the most visual medium (there's a lot of reading), "Dabiq" and other ISIS magazines released in different languages are a potent source of propaganda.

There are interviews (like the one with the Paris attackers), justifications for controversial decisions (like slavery) and propaganda against those it deems enemies.

Although radio pieces are probably intended for those in ISIS-held territory, the audio is also available online where anyone can listen. ISIS leader Abu Bakr Al-Baghdadi's speeches are also released.

There’s also Amaq — an unofficial ISIS news agency of sorts. Its releases lack the typical propaganda in the ISIS videos.

Amaq's coverage mainly relates to the aftermath of airstrikes in ISIS-held cities or raw footage of fighters on the front line. It’s a lot different than ISIS’ more traditional videos that offer soundtracks and glimpses into the caliphate life.

Aaron Zelin, a fellow at the Washington Institute for Near East Policy, studied a single week of ISIS propaganda releases in April last year. He found that ISIS tends to use its media as a “force multiplier” — essentially making it seem like the terror group is doing more than it really is.

Of course, in the end, it’s all just propaganda.