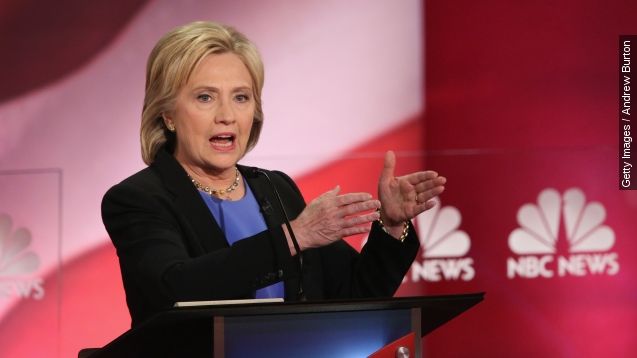 "First of all, I don't take money from big banks; I don't get personal speaking fees from Goldman Sachs," Bernie Sanders said at the NBC/YouTube debate.

Bernie Sanders is talking about ... you guessed it. Hillary Clinton.

In this election so far, Clinton has received hundreds of thousands of dollars from employees of the big banks.

And from 2013-2015 she made almost $3 million in speaking fees for events tied to financial institutions, including Goldman Sachs, Morgan Stanley and Bank of America.

Clinton is also seen as fairly easy on big banks. She wants to build on Dodd-Frank, which Obama signed into law during the great recession to prevent banks from taking huge risks. Sanders, on the other hand, wants to reinstate Glass-Steagall, which separated commercial banking from riskier investment banking.

"Can you really reform Wall Street when they are spending millions and millions of dollars on campaign contributions and when they are providing speaking fees to individuals?" Sanders said.

But Clinton has said she would break up big banks if need be and that her plan expands on Dodd-Frank regulations.

"It goes much further because both the governor and the senator have focused only on the big banks. Lehman Brothers, AIG, the shadow banking sector were as big a problem in what caused the great recession. I go after them," Clinton said.