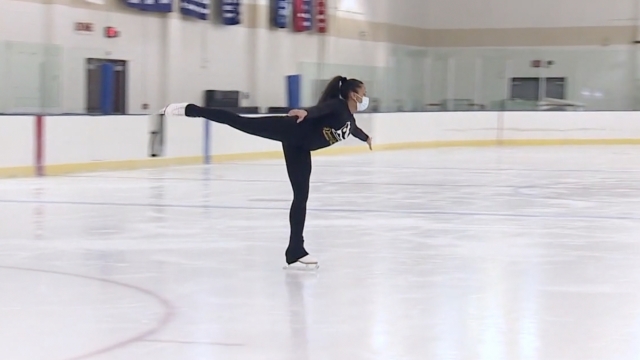 SMS
WXYZ: Exposure, Accessibility Bring Black Kids To Specialty Sports
By Kiara Hay
By Kiara Hay
February 11, 2022
Imani's parents say she's been flipping and dancing around for years, but it wasn't until they showed her Black gymnasts that she fell in love.

When Simone Biles first somersaulted onto the scene, her stunning flips, signature moves, and perfect posture captured the heart of America and Imani Hall too.

Imani's parents, Kiera and James Hall say their daughter has been flipping and dancing around the house for years, but it wasn't until they showed her videos of Black gymnasts that she fell in love with gymnastics.

From four to seven, Imani was self-taught watching YouTube videos and mimicking what she saw. Seven months ago she joined a gym and quickly ran up the ranks. But for sports like gymnastics, the higher you go the higher the cost.

"But we're prepared for that," Kiera said. "We've already made the decision that we will not let finances or anything else stop her from doing her dream and her passion."

But money does stop many others. Professional training can cost $200 to $400 a month and can skyrocket to $15,000 a year to train for the Olympics and it's not just a problem within gymnastics, but ice skating too.

"When I first started, there was a lot of Black people that I knew. But once I started to move up in the levels, they started to wither down," Martin said.

Money being the main factor — and that's one of the reasons Dream Detroit Skating Academy was born.

Angela Blocker-Lloyd is the co-founder of Michigan's first black-owned ice-skating club. Her vision is to make ice skating more accessible for Black and brown people, without losing any of the prestige.

"We want to bring something that is more affordable," she said. "Students can come and they can take it nationally, they can have a career in skating, they can go to the Olympics. We haven't had a skater come out of Detroit."

This story was originally published by Kiara Hay on wxyz.com.