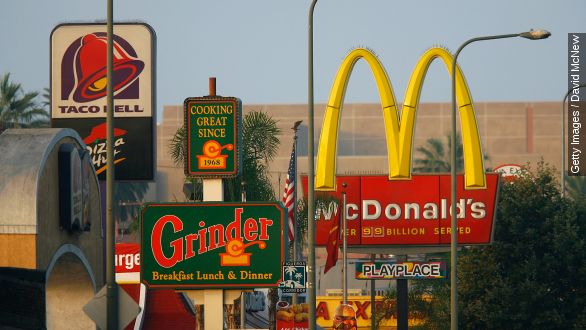 Hang onto your receipt the next time you pick up a Taco Bell biscuit taco or A.M. Crunchwrap — some McDonald’s are letting customers exchange them for a free Egg McMuffin.

That’s right. Once per day, one Taco Bell breakfast receipt will nab you one Egg McMuffin. At least at McDonald’s locations in Northeastern Pennsylvania from April 3 to the 17. (Video via McDonald's)

It’s just the latest salvo in what can really only be described as a battle of the fast food breakfasts between Mickey Dee’s and Taco Bell.

And McDonald’s has started experimenting with a 24-hour breakfast menu in the San Diego area.

Noting this most recent move by McDonald’s, one Janney Capital Markets analyst writes, “clearly, at least some McDonald’s folks are concerned about the potential competition at breakfast that Taco Bell could provide over time — and maybe is providing right now.”

Just last month, Business Insider noted McDonald’s US sales dropped 4 percent in February — a fall much steeper than the 0.7 percent analysts had been expecting.

Tthis video includes images from Getty Images and an image from Mike Mozart / CC BY 2.0 and music from Kevin MacLeod / CC BY 3.0.