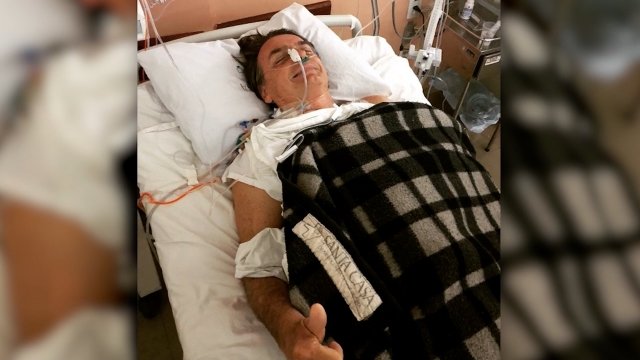 By Caitlin Baldwin
September 7, 2018
He was rushed to the hospital and underwent surgery.
SHOW TRANSCRIPT

Brazil's far-right presidential candidate Jair Bolsonaro is in stable condition after being stabbed at a campaign rally.

Video shows the moment Bolsonaro was stabbed while being carried on a supporters shoulders. He was rushed to the hospital and underwent surgery. Brazilian police say a man has been arrested in connection with attack.

Bolsonaro's son posted a photo of his dad in the hospital saying the stabbing injured "his liver lung and intestine." CNN reports doctors found lacerations in his small and large intestines, but not his liver.

Bolsonaro has been known for making controversial racist and homophobic statements. He's also advocated for looser gun laws. Recent opinion polls show him as the front-runner in Brazil's presidential election.

Bolsonaro's doctors say he may need additional surgeries and could remain in the hospital for days or weeks.