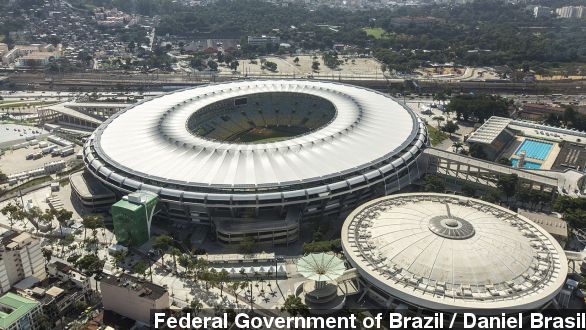 By Matt Picht
May 12, 2014
To prevent violent crime during the World Cup, police in Sao Paulo are advising tourists not to yell or scream when being robbed.
SHOW TRANSCRIPT

If you're headed to Brazil for the World Cup, the country's police have some advice for you: don't argue with the muggers.

Police in Sao Paulo have begun printing pamphlets offering safety tips to tourists who "have no idea how to behave in a city as violent as Sao Paulo." One recommendation reads: if someone tries to rob you, "Do not react, do not yell or argue." (Via The Independent)

The city's World Cup manager told the Estadao de Sao Paulo newspaper, which first reported the story, that visitors should avoid provoking muggers into further violence. Robberies ending in murder have been a growing problem for the city.

The manager said: "Tourists come mainly from Europe and the United States, where they do not see this crime very often. Since they’re not used to it, they will react to an assault. ... There's no use crying over spilled milk."

Brazil has long struggled to curb its violent crime. The U.N. notes Brazil's murder rate is one of the highest in the world, with at least 50,000 reported homicides in 2012.

The upcoming Cup has sparked a security crackdown in some of the more dangerous areas. CNN reports Brazil's military has been patrolling the slums of Rio de Janeiro in an effort to clean up the city before the games begin.

Brazil's $11.5 billion Cup preparations have drawn criticism at home and abroad for their high cost and rampant corruption. Recent audits flagged $500 million of suspicious World Cup spending, and noted a sharp rise in campaign contributions from companies which won construction contracts linked to the Cup. (Via Al Jazeera, The Washington Post)

About 600,000 visitors are expected to flock to Brazil for the tournament, which begins June 12 with the opening game between Brazil and Croatia. The matches end July 13.