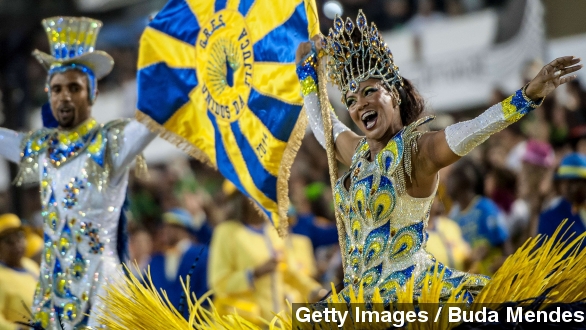 SMS
Brazil Scales Back Carnival Celebrations
By Kate Grumke
By Kate Grumke
February 11, 2015
Brazil is in the midst of drought and economic woes, leading some cities to cancel or scale back their Carnival celebrations this year.
SHOW TRANSCRIPT

Brazil's famous Carnival celebrations this year may not be as fabulous as they usually are.

The country is currently experiencing its worst drought in the past 80 years.

Because of water shortages, officials canceled some Carnival celebrations, and many cities are scaling back party plans.

The country's capital, Brasilia, has canceled its festival, along with full or partial cancellations in at least 15 other smaller cities.

And the biggest celebration in Rio de Janeiro will have less water elements on floats this year, instead using smoke machines and lights. (Video via Brazil Carnival Videos)

On top of the drought, the country's economic woes are also hindering party plans.

One of the largest TV broadcasters in the country, TV Globo, will not broadcast the entire celebration because of money issues.

And one of the sponsors of the festival, Brazil's state-run oil company Petrobras, is entangled in a corruption scandal. But the company says it will provide funding to some of the top samba schools, as promised.

Brazil has had water issues since early last year, but officials decided not to make drastic changes before the World Cup.

The Cup cost Brazil more than $11 billion, and the country was forced to use water deep in its reservoirs.

For the cities that are moving ahead with the parties, Carnival will start Friday.