Brazil's World Cup Loss Was Most Statistically Painful Ever 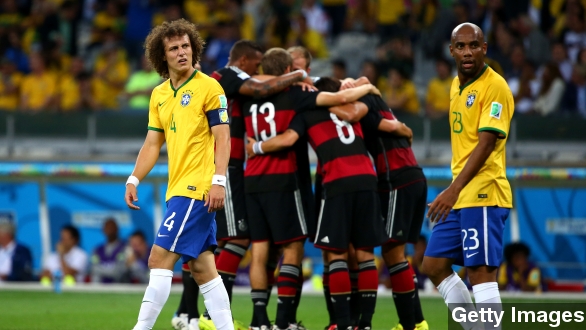 SMS
Brazil's World Cup Loss Was Most Statistically Painful Ever

By Zach Toombs
July 8, 2014
By the numbers, Brazil's 1-7 loss to Germany Tuesday was about as soul-crushing as the World Cup gets.
SHOW TRANSCRIPT

Even if you picked Germany to beat Brazil in Tuesday's World Cup semifinal match, there's no way you saw this coming. (Via Getty Images)

"It's Brazil's worst loss ever and the most goals ever allowed by a host nation." (Via MSNBC)

"I'm trying to think of a parallel in sports, doing this to Brazil, and I can't think of another one." (Via ESPN)

It was a match that made the words "national embarrassment" an understatement. And if you were on Twitter, you've probably already seen your share of photos of sad Brazilians. But they had every right to be sad — and shocked.

After all, Brazil was the favorite to win the match and even the whole World Cup on prediction sites like FiveThirtyEight, which put Brazil's chances for a win Tuesday at 65 percent. Oh, and the odds of Germany going up even five goals on Brazil were a whopping 1 in 1250.

As far as FiveThirtyEight founder Nate Silver could tell, the 7-1 finish was the single most unexpected World Cup score in history. (Via Twitter / @NateSilver538)

But stats aside, what truly made Brazil's loss painful — and historic —was that it happened in Brazil.

Prior to Tuesday, the country's national team had not lost a competitive non-friendly match on home turf since 1975. That's a 39-year streak spanning 68 games. (Via USA Today)

And although comparing sporting sorrow is purely subjective, Tuesday's loss seems even more devastating than Brazil's infamous loss to Uruguay in the 1950 World Cup final, also hosted by Brazil. That defeat came 2-1, not 7-1. (Via The Guardian)