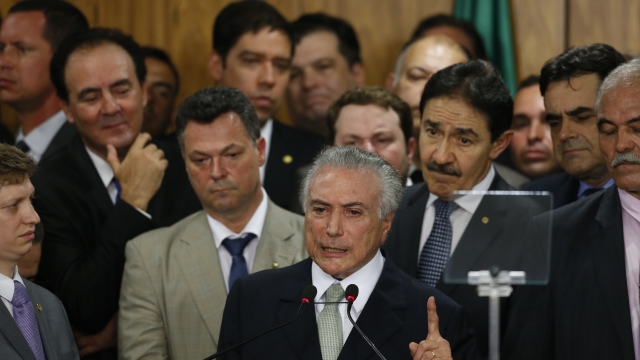 SMS
Brazil's Government Is Now Led Entirely By White Guys
By Melissa Prax
By Melissa Prax
May 14, 2016
Brazil's interim president is coming under fire for appointing only white men to his new cabinet.
SHOW TRANSCRIPT

In trying to eliminate its corruption problem, Brazil may have a new problem — its now all-white, all-male cabinet.

Rousseff was suspended Thursday after Brazil's Senate voted for her to face an impeachment trial.

She was accused of covering budget gaps by pulling money from state-run banks to maintain popularity and win her 2014 bid for re-election.

Brazil is known for being ethnically diverse, and this is the first time since 1979 the cabinet doesn't have any women.

But the new chief-of-staff said the government couldn't find any.

It's not just Rousseff who's critiquing the cabinet change. One of the country's senators was vocal on Twitter, saying it was strange to not have minorities represented.

Another element to Brazil's corruption is the Petrobras scandal — a wide-reaching set of allegations involving bribes and kickbacks from the government-affiliated oil company.

And several of the new cabinet members are accused of being involved in that scandal.