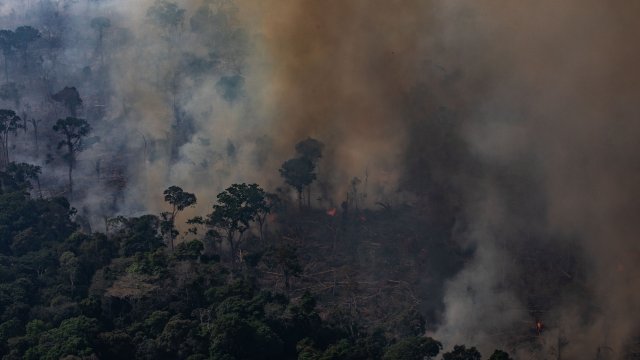 Brazil is rejecting G-7 aid to help fight fires in the Amazon rainforest. The country's foreign minister confirmed the decision and the reasoning behind it on Twitter. He said: "Brazil will not accept any initiative that implies relativizing sovereignty over its territory, whatever the pretext and whatever the guise."

His statement doubles down on Brazilian President Jair Bolsonaro's main reason for pushing funds back — the G-7's alleged colonialist mindset. Bolsonaro tied the label to the organization when French President Emmanuel Macron decided the burning Amazon was "an international crisis" needing immediate discussion at the summit.

The problem is Brazil and other Amazonian countries aren't in the G-7. Bolsonaro said discussing the fires without their direct involvement "evokes a misplaced colonialist mindset."

G-7 countries wound up pledging $22 million in aid Monday to help Brazil fight the fires, plus a combined additional $23 million from Britain and Canada. Brazil originally accepted the funds, but the decision changed after a meeting between Bolsonaro and his ministers.

Critics of the Brazilian president and his administration say the fires are intentional, as Bolsonaro believes the Amazon has untapped "riches" and economic opportunity. Meanwhile, with fires raging, and at the forefront of the world's mind ... Brazil's armed forces will tackle these flames.