Brazil's President Lashes Back At France For 'Colonialist Mindset' 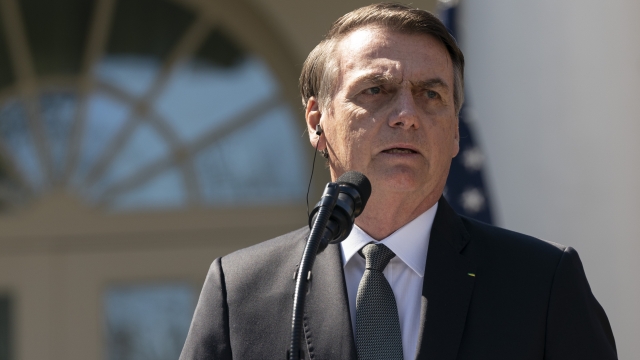 Brazil's president lashed back at Emmanuel Macron after the French president pushed for international dialogue about fires in the Amazon rainforest.

Global outrage over Brazil's environmental policies has grown this week as fires continue to devour parts of the world's largest rainforest, blowing smoke about 2,000 miles away. According to The Guardian, the daily clearance rate is equivalent to the size of New York's Manhattan Island.

Macron tweeted on Thursday that the fires are "an international crisis," and he called on the other G-7 members to make the fires the top priority at their summit.

Brazilian President Jair Bolsonaro took issue with that. Brazil and other Amazonian countries aren't in the G-7, and he said discussing the fires without their direct involvement "evokes a misplaced colonialist mindset."

Bolsonaro took office in January, and he's been nicknamed "Captain Chainsaw" for his actions supporting the logging industry. There have been more than 72,000 fires in the Amazon region of Brazil since he took office, up 80% from just a year ago. And he's been accused of reinterpreting the data about this year's fires instead of seeking solutions.

Fire has long been an issue in the Amazon basin, from both naturally occurring events and, frequently, blazes deliberately set for land clearing. Last month, monitoring groups said the forest is seeing the most alarming deforestation rate in recent history. And it's suspected that some of this week's fires were intentionally set to clear land for cattle ranching, which accounts for up to 80% of Amazon deforestation.

In a statement Thursday, the European Union called the Amazon the planet's "lungs and life support system." And conservationists have expressed concern that the blazes will accelerate the climate change crisis because the Amazon absorbs heat and stores much of the world's carbon. Earlier this year, the U.N. estimated that the world has 11 years to take action on climate change before irreparable damage is done.