Brazil's President Dilma Rousseff Is Out For Good 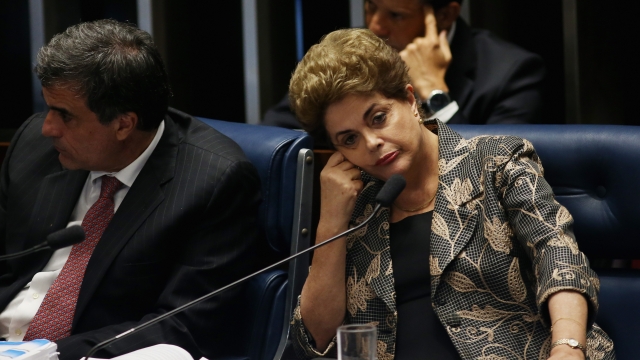 The impeachment trial is over, and Brazil's Senate voted to remove President Dilma Rousseff from office.

The 68-year-old was suspended from office in May. She had been accused of altering financial documents to keep government programs running despite a massive budget deficit ahead of her re-election in 2014.

SEE MORE: If Brazil Votes To Remove Rousseff, Her Replacement May Not Be Better

Rousseff denied the claims, calling the accusations "unjust" and the impeachment "a coup." She testified on Monday before the Brazilian Senate.

"I am going to look in your eyes and I will say with the serenity of someone who has nothing to hide that I haven't committed any crimes ... and these accusations are unfair," Rousseff said, according to a translation from the BBC.

Brazil's economy is the largest in Latin America. But over the past year, numerous credit agencies have downgraded the nation's credit to "junk" status.

The economy is seriously suffering — it's been in a downward spiral for five straight quarters. And it looks like that trend won't be changing soon. In the first quarter of 2016, the economy shrank 5.4 percent compared to the same period in 2015.

Rousseff's former vice president Michel Temer is expected to complete the remainder of Rousseff's term through 2018.