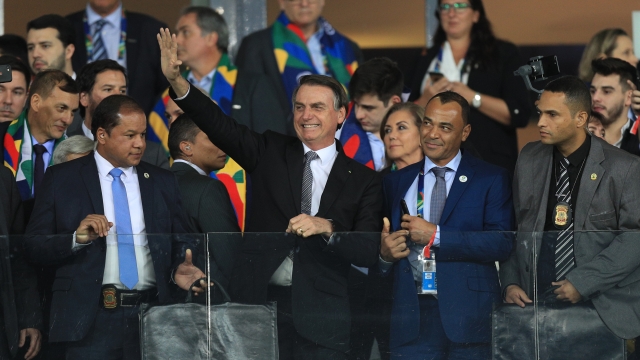 Brazil's president authorized armed forces to help contain fires in the Amazon rainforest for a month, starting Saturday. The move comes amid global criticism over rapid deforestation and the president's purported disregard of potential impacts on climate change.

It's an apparent policy reversal for Brazilian President Jair Bolsonaro, who was inaugurated in January. There have been more than 72,000 fires in the Amazon region of Brazil since he took office, up 80% from just a year ago. And he's been accused of reinterpreting the data about this year's fires instead of seeking solutions.

It's suspected that some of this week's fires were intentionally set to clear land for cattle ranching, which accounts for up to 80% of Amazon deforestation.

On Friday, U.S. President Donald Trump offered to aid Brazil in fighting the blazes. His approach contrasts with several other nations that have threatened sanctions if Bolsonaro doesn't address the fires. President Trump said the U.S.-Brazil relationship is "perhaps stronger than ever before."