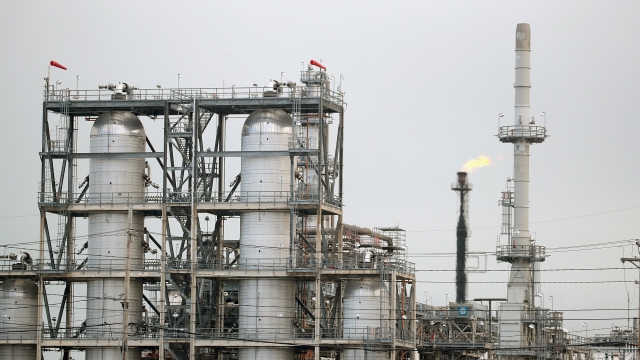 SMS
BP Promises To Be 'Carbon Neutral' By 2050
By Peter Hecht
By Peter Hecht
February 12, 2020
The energy firm announced that it will seek to cut pollution from oil and gas enterprises and step up investments in clean energy.
SHOW TRANSCRIPT

One of the world's major fossil fuel producers is attempting to recast itself as a carbon neutral enterprise.

The energy firm BP announced Wednesday that it will seek to cut pollution from oil and gas enterprises and step up investments in clean energy. The 111-year-old company, once known as British Petroleum, says it hopes to offset its carbon emissions by 2050 or sooner.

Similar initiatives have been announced by the energy firm Total and another global rival, Royal Dutch Shell.

It's part of a changing corporate and public relations strategy by big energy producers since the 2015 Paris Climate Agreement. In 2017, BP produced this promo for an "Oil and Gas Climate Initiative" to reform industry practices.

“Climate change is a global challenge. The world needs energy for a growing population and economy, with lower greenhouse gas emissions."

BP's new CEO, Bernard Looney, said Wednesday the company wants to meet "evolving customer demand and society's expectations." That strategy involves promoting natural gas as an alternative to coal for power generation and cutting pollution from petroleum operations. He had pledged this in 2018:

“We’ll be using the best available technology in our operations, like infrared cameras to detect any leaks in our existing equipment so we can fix them. We’re designing new projects to minimize leaks as we’ve just done with our major gas production plant in Oman."

BP's announcement drew praise from Climate Action 100+, an investment consortium promoting clean technologies. But the Global Witness environmental group dismissed it as "an attempt to grab some positive headlines," saying the company lacks a serious strategy to address the climate crisis.