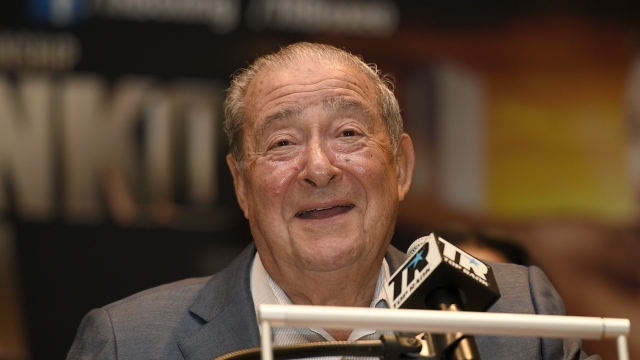 SMS
Professional Boxing Seeks Its Comeback In Las Vegas Next Month
By Gage Jackson
By Gage Jackson
May 23, 2020
Top Rank promoter Bob Arnum is seeking state approval for five fights to be hosted at the MGM on June 9, without fans in attendance.
SHOW TRANSCRIPT

Boxing is seeking to join the list of sports making a comeback as lockdown measures begin to ease nationwide.

Top Rank promoter Bob Arum said he is applying for state approval to host five fights on June 9 at the MGM Grand in Las Vegas. Another fight card would be held two nights later. Both are to be broadcast by ESPN. The fights would kick off a twice-weekly boxing show, to be broadcast from the hotel in June and July.

Arum says no fans would be in attendance and everyone, including fighters, will be tested for the virus at least twice during the week leading up to the events.

The Nevada Athletic Commission will meet next week to consider approval of the events, along with plans for the UFC to host fights in the near future.

Arum told The Associated Press, "Once we get those fights in and UFC gets its initial fights in, both of us will ask for additional dates. The key was getting enough testing, and we've got plenty of testing in Nevada to hold our events."

Arum did not specify who would be fighting on June 9. But he said the card would feature quality fighters who were on ESPN before the shutdown. The boxers are expected to be announced once events are approved.

Additional reporting by Tim Dahlberg of the Associated Press.