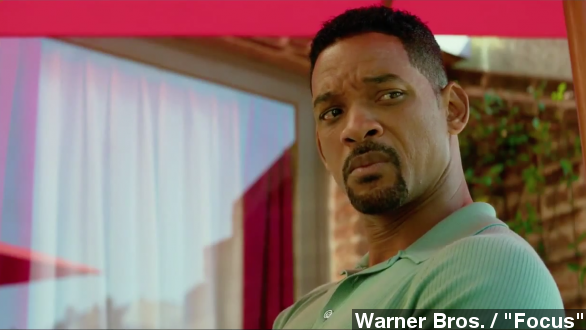 SMS
Box Office Top 3: Will Smith's 'Focus' Steals No. 1 Spot
By Jamal Andress
By Jamal Andress
March 1, 2015
Taking the top the spot at the box office this weekend is "Focus," bringing in $19 million in its debut weekend.
SHOW TRANSCRIPT

Last time we saw Big Will on the big screen, it wasn't his best work. But the megastar is back with a new film and, thankfully, M. Night Shyamalan is not involved.

Taking the top the spot at the box office this weekend is "Focus," bringing in a measly $19 million in its debut weekend. The caper film puts The Fresh Prince of Bel-Air across from the Duchess of "The Wolf of Wall Street," minus the Brooklyn accent. (Video via ABC)

"Focus" is the first movie Will Smith has starred in since "After Earth" in 2013, and considering just how bad that was, "Focus" is all the more important to Smith's superstar reputation.

With a $50 million budget, Focus didn't need to pull in "Men In Black" or "Hancock" numbers on its opening weekend. But the studio was expecting a $22 or $23 million debut, and "Focus" fell short of that goal. (Video via NBC / "Extra")

As for the Smith's role in the movie?

One critic says of Smith's performance, "It could have been more believable, I could have bought it more but god Will Smith is so likable! He still has that magnetic screen charisma." (Video via YouTube / Schmoesknow)

And YouTube movie critic Jeremy Jahns said of the actors, "I love Margot Robbie. I love Will Smith they were great together, they have good chemistry too!"  (Video via YouTube / JeremyJahns)

So, despite a mediocre opening and so-so reviews from critics, I think it's safe to say Will Smith's superstar status is still intact. And with a scheduled Christmas Day opening and comic book film on the way, Smith could have one hell of a 2015 and '16.

In its third week, "Kingsman: The Secret Service" finally beat "Fifty Shades of Grey" at the box office, taking the second spot this weekend and bringing in an estimated $11.7 million.

The two films debuted in the same weekend, and despite "Fifty Shades" record-breaking box-office numbers, "Kingsman" has proven to have more staying power. "Fifty Shades" dropped 74 percent from its first to its second weekend, while "Kingsman" only dropped 50 percent. And now in both of their third weekends "Kingsman" has finally surpassed Anastasia and Christian.

"SpongeBob SquarePants" continues to be the dominant family-friendly choice for moviegoers, bringing in an estimated $11 million in its fourth week at the box office.

As for next week, Hugh Jackman continues his love affair with movies that star mutants, robots or both.