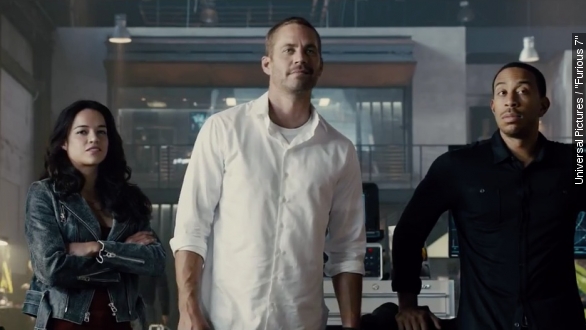 SMS
Box Office Top 3: What Could Unseat 'Furious 7' At No. 1?
By Jamal Andress
By Jamal Andress
April 26, 2015
Taking the top spot for the fourth week in a row is "Furious 7," bringing in an estimated $18.2 million, but a new film could soon be No. 1.
SHOW TRANSCRIPT

This weekend at the box office, "Furious 7" wins again while the rest of the film industry dives into their metaphorical bunkers in preparation for "Avengers: Age of Ultron."

Taking the top spot for the fourth week in a row is "Furious 7," bringing in an estimated $18.2 million and helping push the the film's domestic total to more than $320 million. And while the U.S. total is impressive, the worldwide total is historic. After just four weeks, "Furious 7" has brought in $1.3 billion, making it the fifth-highest grossing film of all time.

But it's hard to talk about breaking records without discussing the box-office behemoth now headed for your local theater. "Avengers" could end up hijacking "Furious 7"'s surging numbers, as movie-goers might head to theaters for superheroes instead of super cars.

Oh, and if you're wondering, "Avengers 2" has already brought in $200 million overseas. Like I said, box office behemoth. As for this week, on to No. 2.

And perhaps more importantly, someone finally wrote a generally favorable review of the comedy, getting rid of that Rotten Tomatoes score of 0 percent.

Paul Blart has been lampooned by critics, but it's performing well at the box office. Kevin James and company saw a modest 35 percent drop in ticket sales from opening weekend, but it still beat out this week's new releases. (Video via NBC)

So remember kids, quality is only half the battle.

In last place is the only movie brave enough to go anywhere near "Avengers" Day, "The Age of Adaline" bringing in an estimated $13.3 million. "Adaline" seems to be the ultimate alternative to the stereotypical summer blockbuster. A modest love story, with a modest budget, and, so far, a modest opening.

While no one has called "Age of Adaline" brilliant or lousy, critics are more torn than usual about the leading lady's performance.

Deadline film critic Pete Hammond said: "This movie, I thought, was anchored by a terrific cast. Blake Lively is perfect in this movie."

"She shows few signs of having lived through two world wars, The Beatles, the civil rights movement, punk rock or anything at all." New York Times critic Manohla Dargis says.

If you’re still not convinced at how wide the range of criticism is, Grantland's Wesley Morris calls Lively "an exceptionally lucky cigarette girl."

As for next week: Well, you know.