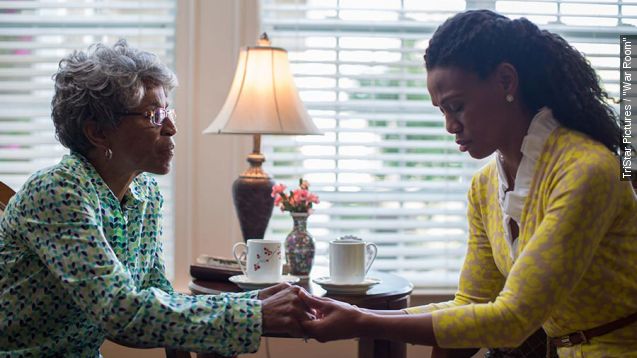 Not many people went to the theaters this weekend, but those who did picked religious drama over gangster rap and Appalachian comedy.

Just a friendly reminder: movie theaters are actually open on Labor Day weekend, and you are allowed to go visit them.

In its second week out, the Christian drama "War Room" has risen to the top of the box office with a $9.3 million domestic haul. Not bad for a movie that only cost $3 million to make.

Despite bad reviews and a limited distribution, the film only dropped 18 percent from its opening of $11.3 million. It's not quite in "Heaven Is For Real" territory, but it's the best a faith-based film has done in awhile.

Coming in at No. 2, "Straight Outta Compton" is down but not out, raking in $8.9 million and rapidly barreling toward breaking $150 million domestically.

"Compton's" impressive performance has partly been due to a lack of strong competition, but not even the N.W.A. could escape the Labor Day doldrums.

The long weekend is historically bad for films, and this year was no exception: No single movie broke the $10 million mark. What's more, total U.S. sales didn't pass $100 million. That's only happened three times in the last five years.

It's easy to blame the Labor Day slump on vacationing Americans too busy barbecuing or traveling to go see a movie, but Hollywood's also part of the problem. Studios have learned to hold off on their big hitters till fall, reserving the long weekend for less valuable releases. Speaking of which, No. 3.

Sometimes fast cars, hot girls and high-stakes action just can't beat a nice woodland hike. "A Walk In The Woods," the Bill Bryson adaptation which stars Robert Redford and Nick Nolte, ambled its way to third with a solid $8.1 million. It's an impressive debut for a film that is only getting a lukewarm reception from critics and audiences.

It at least did better than the Statham-less "Transporter" reboot, which cost way more money to make and ended up with a lackluster $7.1 million. This is the third big box office bomb we've seen in the past two weeks, behind Owen Wilson's "No Escape" and Zac Efron's "We Are Your Friends."

Oh, by the way, "Jurassic World" broke the $1 billion mark internationally this weekend. Have we mentioned that Universal's having a good year?

As for next week, finally, a murderous psychopath with some manners.