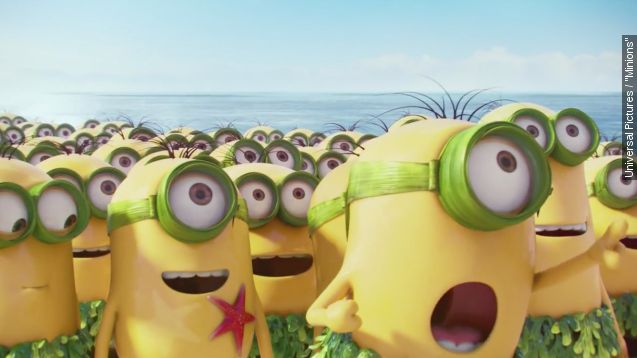 By Jamal Andress
July 12, 2015
"Minions" brought in an estimated $115 million this weekend, the second-best debut weekend of any animated film.
SHOW TRANSCRIPT

Gru’s little henchmen are off on their own, and they’re doing much better without him – at the box office at least.

Taking the top spot this weekend was "Minions" bringing in an estimated $115 million. That’s the second best debut weekend all-time for an animated film, just barely falling behind “Shrek the Third” which brought in $121 million in its debut.

The Minions’ $115 million debut is also the fourth best open this year. Which is saying something, considering this summer had two of the top three opens all-time.

And the Minions are doing even better across the pond. After just two weekends in theaters, "Minions"' foreign box office total sits at a cool $280 million.

But “Minions” does have its problems.

“It’s kind of slapstick simple humor, and kids were dying. They were loving it in this auditorium. A minion would fall over on his face, and kids would just roar!” YouTube's Jeremy Jahns said.

Critics haven't rated the film nearly as high as its two predecessors, with many complaining there’s just not enough there for a full-length film.

Next up, "Jurassic World" finally fell from its top spot at the box office after four weeks at No. 1. It brought in an estimated $18 million this weekend and pushed its domestic total to $590 million.

“Jurassic World” currently sits at No. 4 on the all-time domestic box office list but it will need to assemble another $33 million to take “The Avengers” spot at No. 3.

“Jurassic World”, “Furious 7” and now “Minions” are all part of Universal Pictures’ best year at the box office since the turn of the century. Three of the top four debut weekends in 2015 belong to Universal.

And finally, Disney Pixar’s “Inside Out” rounds out the top three, bringing in an estimated $17 million in its fourth week.

As for next week, Paul Rudd as a superhero. I promise to take him seriously if you do.