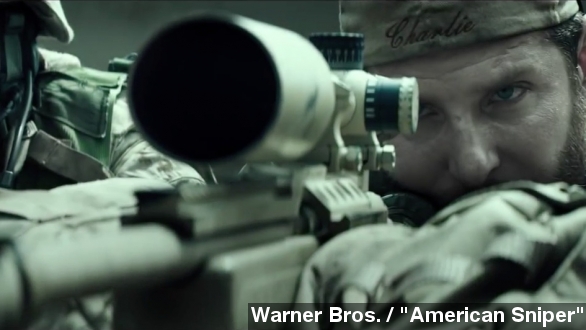 This week at the box office; "American Sniper" continues to pull in way more money than any other Best Picture nominee, and shaky cam makes a comeback that nobody asked for.

American Sniper sits atop the box office for the third weekend in a row, bringing in an estimated $31 million during Super Bowl weekend — which is another box office record for Clint Eastwood's critically-acclaimed film.

The $31.8 million weekend barely inches past the previous record holder "Hannah Montana/Miley Cyrus: Best of Both Worlds Concert Tour" which brought in $31.1 million during Super Bowl Weekend in 2008.

The legs on "American Sniper" have been impressive – the domestic total for three weeks into the film's release is $248 million.

Which makes the Best Picture nominee the highest grossing war-themed movie in US history, better even than the previous record holder "Saving Private Ryan" which brought in some $216 million domestically.

And with the 87th Annual Academy Awards only weeks away, "American Sniper" will soon have a chance at some more history, having been nominated for six Oscars including the two big ones Best Picture and Best Actor.

The lovable British bear just barely takes back the number two spot this week bringing in an estimated $8.505 million in its third weekend at the box office. As you might imagine the film is doing even better overseas – in the UK alone "Paddington" has a box office total of $52 million.

Rounding out third place this week is the only new movie to make the top three: Michael Bay's "Project Almanac," bringing in an estimated $8.5 million.

In the same vein as "The Blair Witch Project," "Paranormal Activity" and, most recently, "Chronicle," "Project Almanac" is a found footage film which in layman's terms means lots and lots of super duper shaky cam.

It also means that you as a viewer have to believe the three teenagers actually lug the camera around with all this time travel going on, which having seen the movie I can tell you is unbelievable.

But despite the constant shaky cam and the stomach problems that come with it, the movie has some saving graces, ranging from lead actor Jonny Weston's performance, to an authentic portrayal of what would happen if a bunch of teenagers suddenly got their hands on god-like powers.

"They do things you would probably do too, like win the lottery or go after the girl of your dreams. Both!" (Video via YouTube / SchmoesKnow)

"This movie is so much fun, I think the target audience of teenagers will love this film" (Video via Deadline)

One thing you can always count on with a found footage film is an extraordinarily low production budget and "Project Almanac" is no different. Project Almanac cost just $12 million to produce which means it's more than half way to breaking even just three days after its release.

As for next week, are ya ready kids?