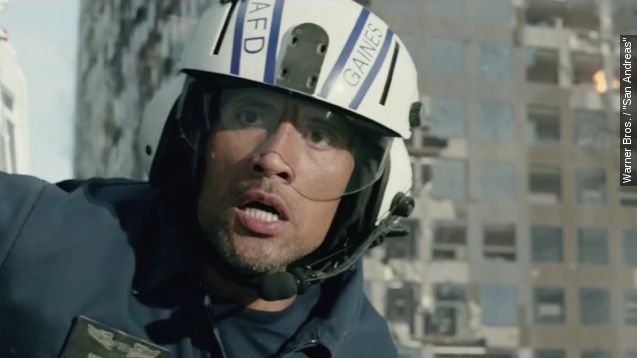 After pissing off doctors ‘round the world in his last movie, Dwayne “The Rock” Johnson has moved on to seismologists.

Wrecking its way to the No. 1 spot this weekend is "San Andreas" with an estimated $53 million debut weekend. The $53 million is far more than anyone expected and beats some analysts' projections by more than $20 million.

And while this is great for Warner Bros., it's even better for "The Rock," who has officially stepped into his role as a headlining movie star.

"San Andreas" is Johnson’s fifth-biggest debut weekend at the domestic box office behind the "Fast and Furious" franchise and “The Mummy Returns,” but it is by far the most successful movie he’s done that stars “The Rock” and “The Rock” only.

But back to the movie — “San Andreas,” as a whole, falls into the classic disaster movie mold.

Super simple plot, spotty science and and most importantly the most shocking special effects money can buy.

Whether it’s blowing up the White House or splitting California in half, "San Andreas" does the one thing a disaster movie is supposed to do: wreak havoc.

Oh, and before we move on, no way that’s the Rock’s kid. Just sayin.

“Pitch Perfect 2” holds on to the No. 2 spot, bringing in an estimated $14 million in its third weekend at the box office. That brings its domestic total to $147 million and its worldwide to more than $228 million about double what the original movie made. Which means, you can likely look forward to a "Pitch Perfect 3."

"Tomorrowland" continues its disappointing showing at the box office this week falling to third in its second weekend bringing in an estimated $13.8 million. And with a $190 million production budget, "Tomorrowland" is still more than $50 million from breaking even.

But with all the Marvel money Disney and company is bringing in, who cares, right?

As for next week, How many celebrity cameos can Warner Bros. fit in two hours? We’re about to find out.