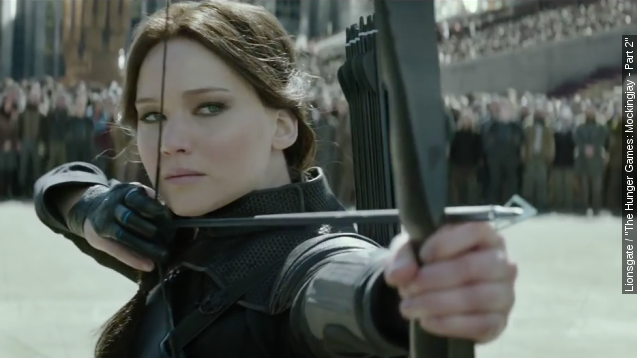 While franchises like Harry Potter and Twilight benefited from splitting their finales, it seems Hunger Games critics and audiences were not amused.

After four years, four movies and more than $2.5 billion, it’s all over.

Taking the No. 1 spot at the box office by a landslide is the fourth and final installment of the Hunger Games series, bringing in an estimated $101 million.

A $100 million debut is huge by almost any standard. In fact, it’s the fifth biggest opening this year.

But unfortunately for Katniss, The Hunger Games (like “The Avengers” or the most recent “Fast and Furious” movies) is a franchise where $100 million in three days just doesn't cut it.

The $101 million debut is the smallest opening in the franchise by about $20 million.

Whereas franchises like Harry Potter and Twilight benefited at the box office from splitting their finales, when it comes to the Hunger Games, critics and audiences may finally be sick of the gimmick.

“And this is exactly why you should never take average size books and split them into two movies for the big screen.” YouTube's Jeremy Jahns said.

“Like why can’t you make one movie? I would have been so much happier, if you just made one movie! And it’s so shameless! It’s totally cynical and totally shameless.” What The Flick's Christy Lemire said.

It’s a trend that hollywood can’t seem to get rid of. Hunger Games,Twilight, Harry Potter, Divergent and The Hobbit have all stretched single books into two (or three) movies. And while the studio’s cash a bigger check, hopefully fans have had enough. I know I have.

The 24th Bond film takes the No. 2 spot this weekend, bringing in an estimated $14 million but also taking a significant hit on account of Katniss Everdeen.

Good thing for Bond, “Spectre” is killing it overseas. After about a month in some foreign markets, the film is sitting pretty with more than half a billion dollars in overseas ticket sales.

Holding on to a spot in the top three for the third week in a row are Snoopy, Lucy, Charlie and the gang, bringing in an estimated $12 million. Which was just enough to keep, Seth Rogen’s “The Night Before” out of the top three and in certified flop territory.

As for next week, Apollo Creed’s baby boy.