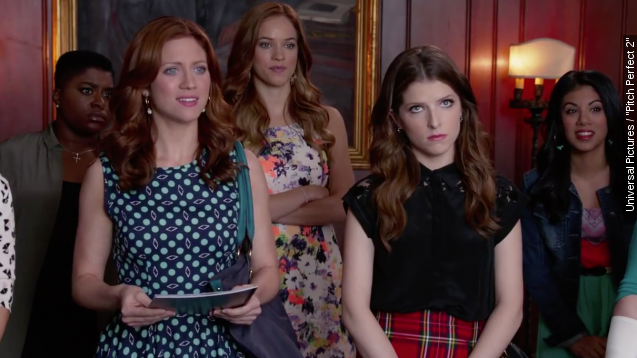 “Pitch Perfect 2” takes the No. 1 spot this weekend bringing in an estimated $70 million, while also kicking the "Avengers" off its box office perch.

Analysts predicted Anna Kendrick and company would have a $40 million bow in its opening weekend but instead the ladies had an aca-awesome $70 million debut. (Video via NBC / "Late Night with Seth Meyers")

Sorry about that, I couldn’t resist.

This open is especially impressive considering the movie’s budget. The sequel cost only $40 million to produce, so a $70 million weekend is a roaring success. And it’s another win for Universal Pictures who has had one hell of a 2015.

Then just two months later Universal Pictures releases what would become its first billion dollar film in “Furious 7.” And if that’s not enough box office punch for ya, Jurassic World hits theaters in a month.

Now we move to No. 2 at this weekend’s box office: the best action movie I have ever had the pleasure of seeing on a 40x60 screen.

"Mad Max: Fury Road" takes second place this week bringing in an estimated $44 million and proving once and for all critics can have fun at the movies.

With a 98% Rotten Tomatoes score “Mad Max: Fury Road” has managed to punch all the right buttons for critics while also having about as much dialogue as you can fit on a post-it note. Despite the vague character arc and sheer lack of explanation for much of anything – critics loved George Miller’s high-octane no-holds-barred thrill ride.

Aside from how intense and wonderful "Mad Max" is – moviegoers and critics alike can't help but notice this isn’t really Max’s movie.

"Hardy's Max is practically a supporting a character in his own movie," IGN's Scott Collura said.

"It should be called Furiosa Road & Mad Max… yeah, he's in this movie too." YouTube's Jeremy Jahns said

Hey Tom, it's all good man, you were definitely my favorite character in "Lawless." Hands down. Moving on.

In at No. 3 this week is the newest billion-dollar Marvel flick, “Avengers: Age of Ultron” bringing in an estimated $38 million in its third weekend out. And for those of you keeping score that makes Avengers 2 Marvel’s third billion-dollar movie in four years.

As for next week, a two-hour advertisement for Disney's theme park.