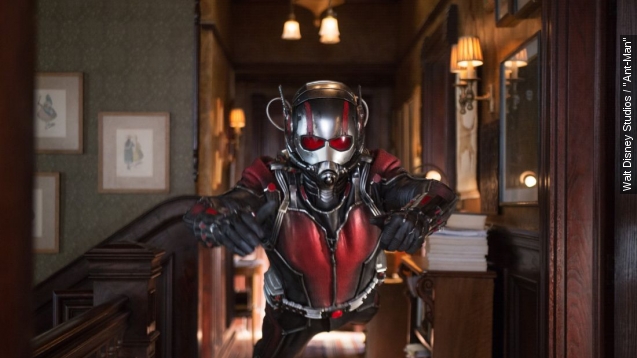 Thanks to a disappointing showing from Adam Sandler's video game comedy "Pixels," Marvel and "Ant-Man" are still going strong at the box office.

The combined forces of Pac-Man, Donkey Kong and Q*Bert all lost out to a man dressed as an ant. This is the world we live in.

It was a close call, but Marvel’s “Ant-Man” took an ant-sized lead at the box office this weekend, bringing in an estimated $24.7 million.

The film’s domestic total now sits at $106 million. Admittedly, that’s on the low end of the Marvel money scale, but it’s still a respectable haul.

"Ant-Man’s" success drives home the point “Guardians of the Galaxy” made last year — not all superhero movies have to be super-serious saving-the-world epics.

It’s nice to watch Marvel just have fun with its heroes now and then.

Next up, what probably seemed like a sure-fire winner on paper ended up flopping in theaters. The Adam Sandler-driven comedy “Pixels” came in second place with a flat $24 million.

That's probably not the opening Sony execs were hoping for when they sunk $88 million into the film. Adding big-name comedy talent to '80s arcade nostalgia should have been a winning combination.

"We are all children of the '80s, so in theory 'Pixels' is for us," film critic Christy Lemire said.

But it wasn't, and critics were happy to let Sony know that in no uncertain terms. Some of them even sounded a little ... betrayed.

Chris Stuckmann said, "This movie was made for me! So the fact that I frickin' hated it, should really tell you all you need to know."

"It's an Adam Sandler movie. Do not be fooled," Jeremy Jahns said.

The film hasn't been very well received by the general public, either, according to Rotten Tomatoes. But at least Sony can take some comfort in the international box office figures — "Pixels" brought in another $25 million overseas.

And finally, in a weekend with Jake Gyllenhaal punching people, Cara Delevigne getting all teen romance-y, and Amy Schumer being Amy Schumer, somehow the adorable yellow earplugs managed to hang on to their top 3 spot. "Minions" brought in a respectable $22 million over the weekend.

Gru's incomprehensible henchmen are doing even better overseas, where they've been number one at the box office three weeks in a row. The film's made Universal over $750 million so far, and over $500 million of that total has come from international ticket sales.

As for next week, you think Ethan Hunt is ready for a desk job yet?