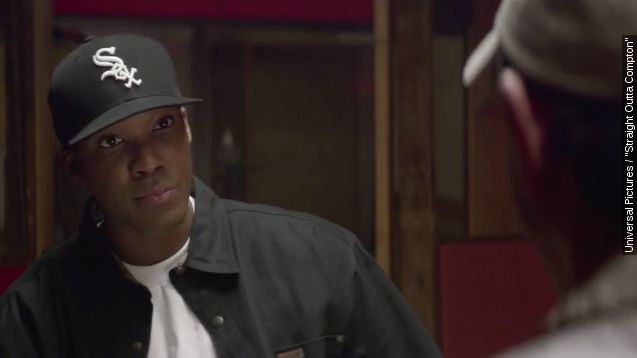 SMS
Box Office Top 3: NWA's Past Doesn't Slow Tickets Sales
By Jamal Andress
By Jamal Andress
August 23, 2015
If last week was all about praising "Straight Outta Compton," this week has been about acknowledging its faults.
SHOW TRANSCRIPT

"Straight Outta Compton" has another dominant weekend at the box office despite a week of controversial press for N.W.A. — and, more specifically, Dr. Dre.

"Straight Outta Compton" took the No. 1 spot for the second week in a row, bringing in an estimated $26 million. That puts the total gross at more than $111 million – nearly triple the $29 million production budget.

But if last week was all about praising "Straight Outta Compton," this week has been about acknowledging its faults, including the glaring omission of Dr. Dre’s history with domestic violence.

"Were the harsh truths left out of the biopic just a little too real?" MSNBC's Janet Mock said

"Every person that I know that walked in to see 'Compton' thought about the misogyny," BET.com's Clay Cane said.

"Just like racism is alive and well in this country so is sexism and that’s my big criticism of the film. It could have been a great film if it had the courage to deal with that but it did not," activist Kevin Powell said.

And while no one has doubted the young actors' performances or the brilliant directing, the lack of acknowledgment of the group’s violent past has been a point of contention.

This week, director F. Gary Gray addressed why that piece of history did not make it on screen.

"The original editor’s cut was three hours and 30 minutes long, so we couldn't get everything into the movie. What we had to do was make sure we served the narrative, and the narrative was about N.W.A." Gray said. (Video via YouTube / RealTalkNYVideo)

Taking the No. 2 spot for the second week in a row and spending its fourth week in the top three is Tom Cruise, Jeremy Renner, Simon Pegg and the Arby's guy. The Mission: Impossible team roped in a formidable $11 million and beat out three new releases this weekend.

Last but not least: "Sinister 2." The only new release to make the top three brought in an estimated $10 million. "Sinister 2" is yet another horror sequel that pales in comparison to the original.

Variety writes, "Anyone who found the original a cut above the average horror pic will likely leave the theater disappointed, if not downright insulted."

Because, horror films are so cheap, to make the temptation to make sequels seems to be unbearable for production companies.

From "Insidious" to "Paranormal Activity" to "The Conjuring," if a horror film has a great run in theaters you can bet there will be a sequel … and it'll probably be terrible.

As for next week, Owen Wilson throws a kid off a roof.