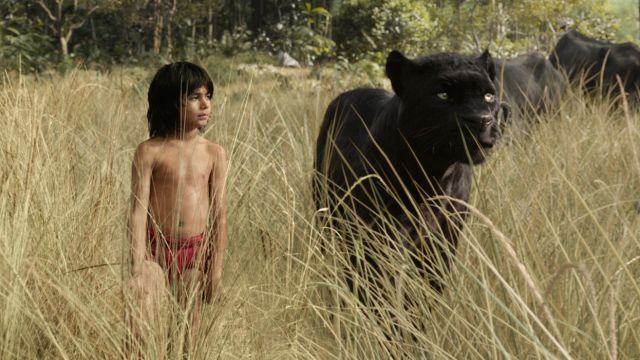 SMS
Box Office Top 3: 'Jungle Book' Earns More Than The Bare Necessities
By Jamal Andress
By Jamal Andress
April 17, 2016
The $103 million bow is the second-largest April opening ever and one of the best debuts of all time for a PG-rated film.
SHOW TRANSCRIPT

This weekend, the highly anticipated live-action "Jungle Book" film pulled in a hell of a lot more than the bare necessities.

Taking the No.1 spot this week is "The Jungle Book," bringing in more than $103 million in its debut. It's the second-largest April opening ever, behind "Furious 7." It's also one of the best debuts of all time for a PG-rated film.

But what makes this film more special is its critical reception and the extraordinarily strong performance by its 10-year-old star.

Neel Sethi's performance in "The Jungle Book" was opposite some of the best actors in the business: Bill Murray, Lupita Nyong'o and Idris Elba just to name a few. He also had to interact with puppets on set instead of the actual actors.

But despite these challenges (and being a 10-year-old), Sethi carried the film and, as a result, has received critical praise from all corners of the film world.

"The movie wouldn't work without it's star, Neel Sethi. He was only 10 when 'The Jungle Book' was in production, and he perfectly embodies the role," IGN's Terri Schwartz said.

As it stands, "The Jungle Book" has a 95 percent approval rating on Rotten Tomatoes, and it's safe to say the kid deserves a share of that credit.

Taking the No. 2 spot with a much smaller but still solid debut is "Barbershop: The Next Cut," bringing in an estimated $20 million.

This is the worst box office debut in the series. The original "Barbershop" brought in just over $20.6 million in its opening weekend, but that was more than 10 years ago.

On the other hand, this is definitely the best reviewed film of the trilogy. It boasts a 92 percent rating on Rotten Tomatoes, which leads the pack and is a pretty high score for a comedy.

But the film's high praise isn't just about making people laugh. The general consensus on what makes the difference in "The Next Cut" is that it deals with real issues, like gang violence and fatherhood.

"They do a really tricky thing here, very beautifully in that they root it in this absolute now reality of this violence," Christy Lemire said.

"This one kind of takes this unflinching look at what's going on in Chicago and the rest of the country," Matt Atchity added.

Falling to No. 3 in its second week is Melissa McCarthy's "The Boss," bringing in an estimated $10 million and pushing the domestic total just past $40 million.

As for next week, your favorite fairy tale gets really dark.