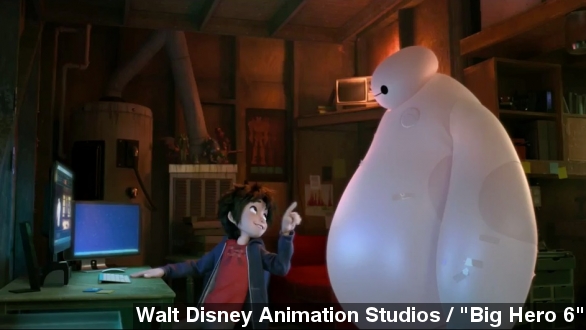 You know, it’s getting harder and harder to believe that Matthew McConaughey was once the prince of the predictable rom-com.

“You calling my bluff?”

But before we get to that.

“We jumped out a window!”

“We jumped out a window.”

Disney Animation Studios continues its winning streak at the box office with “Big Hero 6”, which took the number one spot this weekend bringing in an estimated $56 million.

For those who are wondering, that’s Walt Disney Animation’s biggest stand-alone weekend ever at the box-office

What may be even more impressive is the critical success of the film. “Big Hero 6” boasts a 91% rating on Rotten Tomatoes and a score of 75 on Metacritic.

Walt Disney Animation Studios has been on a roll with its big animated releases for the holiday season, with “Wreck it Ralph” in 2012, “Frozen” in 2013 and now “Big Hero 6”

Frozen is not only the highest grossing animated film ever, it is also the fifth-highest grossing movie of all time. (Video via Walt Disney Animation Studios / "Frozen")

Christopher Nolan’s space adventure took the number two spot at the box office this weekend, bringing in an estimated $50 million and giving McConaughey another notch in his forever improving ‘serious movie star’ belt.

And it seems the lead actor’s performance is only topped by the stunning visuals of the film.

IGN: “This is an experience one can only truly have in the theatre itself and it is worth having.”

YouTube / Jogwheel: “I implore you to see this film on the largest screen possible. It will not disappoint.”

Picking up the figurative box office scraps this week is “Gone Girl”, which brought in an estimated $6.1 million and found its way back in to the top 3 in its sixth week.

But with “Big Hero 6” and “Interstellar” splitting more than $100 million worth of ticket sales, "Gone Girl’s" 3rd place spot is a little less important than usual.

As for next week, wanna hear the most annoying sound in the world, again?

“Hey guys, I know this is weird timing, but I gotta take this. It’s my dead Dad.”