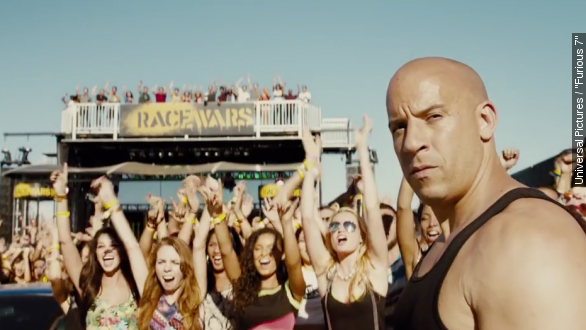 Turns out "Furious 7s"'s success is anything but a fluke. Two weeks in, this risk-it-all action movie seems to be headed to the very exclusive billion-dollar club.

Vin Diesel and his family of co-stars have taken "Furious 7" into the record books, bringing in $60 million in its second weekend out and passing $800 million in worldwide ticket sales after just 12 days.

And while the film is pulling in amazing sales domestically, the international audience is really driving "Furious 7"'s numbers (pun intended). In Russia, "Furious 7" brought in $15 million on opening weekend, the largest opening for any movie in Russian box office history. China's nearly $69 million opening day rivaled the US and was the biggest in China's history. Oh, and by the by, the film still hasn't opened in Japan. (Video via NBC)

Until the juggernaut that is Marvel's "Avengers" hits theaters May 1, the competition for "Furious 7" is slim.

As Forbes writer Scott Mendelson points out, early April is the new late-May: "There is a lot that can happen over the next month, but the film basically gets to run the tables between now and May 1st."

Holding on to the No. 2 spot is "Home," bringing in an estimated $19 million in its third weekend. That puts the Jim Parsons, Rihanna flick just under $130 million domestically.

And the only new movie out this weekend rounds out third. "The Longest Ride" takes third this week in its opening weekend bringing in an estimated $13 million, which isn't a ton but is right in the Nicholas Sparks wheelhouse.

Nicholas Sparks is the "Sap King" of fiction writing. He's given us sappy titles like "The Notebook," "Dear John" and every other major motion picture that features a couple pre-kiss on the movie poster. And while Sparks is good at making people cry, he's great at making low-cost, high-return movies. (Video via YouTube / Movies Coming Soon)

"The Notebook," just like "The Longest Ride," had a $13 million opening weekend, and it ended its run at the box office by quadrupling its production budget in worldwide ticket sales. Sparks did a similar job with "Dear John."

But we're gonna have to wait and see if Sparks can work his magic on this latest film. His last at bat, "The Best of Me," didn’t land with critics or moviegoers.

As for next week, Kevin James continues his Adam Sandler-esque downward spiral.