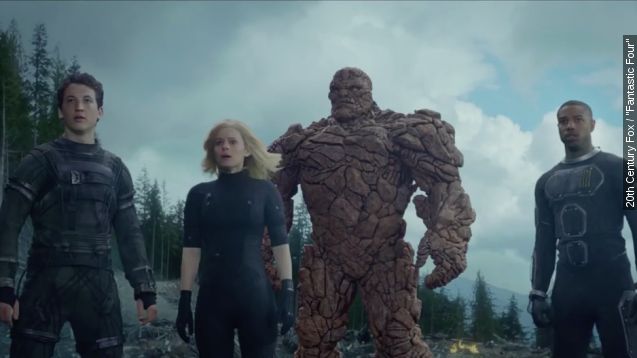 At this point, to call these four "fantastic" seems misleading.

Despite seeming impossible a few months ago, Ethan Hunt and company have held on to their No. 1 spot bringing in an estimated $29 million in their second weekend out. That’s a 47% drop in ticket sales which is good considering the large batch of new releases this weekend.

Also, Rogue Nation is still crushing it overseas; after two weekends in theaters the fifth Mission Impossible has a worldwide box office total of $265 million, nearly 60% of which has come from across the pond.

And with that, we reluctantly move to Number 2. Moviegoers and critics around the country looking for a decent Marvel reboot got this instead. “Fantastic Four” brought in an estimated $26 million in its debut weekend taking the No. 2 spot.

And let’s not forget 2005’s universally loathed "Fantastic Four" did better than this. You had one job, guys.

According to Box Office Mojo, if you adjust for inflation this is the second worst debut weekend of any movie from the Marvel universe, behind a Punisher movie.

The only thing worse than the ticket sales is the critical reception.

Pulling in a 9 percent on Rotten Tomatoes makes Fantastic Four one of the worst reviewed films of the summer.

Despite the fun trailer and great young talent on screen, some would say there was writing on the wall this latest Fantastic Four would be a terrible movie.

"Those of us who follow this kind of news know this was a troubled production, there was a huge second round of filming. … This movie’s a mess and it shows on screen," Rotten Tomatoes Editor-in-Chief Matt Atchity said.

But the final straw for Mr. Fantastic and Co. may have come when the movie’s director tweeted this, less than a month before the film’s release.

With four tries and four face plants I think it’s time to let this "Fantastic Four" thing go … or give it to Marvel Studios.

The real winner this weekend just so happens to be in third place. Jason Bateman's "The Gift" brought in an estimated $12 million in its debut. And like many horror flicks and thrillers, "The Gift" has a tiny production budget. This one weighs in at just $5 million.

Along with having doubled its budget in the first three days, “The Gift” also has great reviews, which could help in the coming weeks.

“The Gift” serves as another win for Blumhouse Productions, the same company behind the Paranormal Activity and Insidious franchises — both wildly successful and both cheap to make.

As for next week, Ice Cube finally makes up for "Are We There Yet."