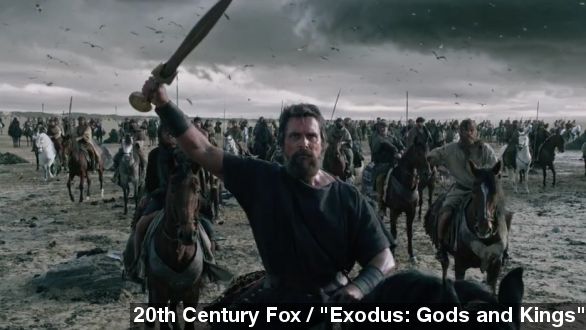 Despite universally dismal reviews, "Exodus: Gods and Kings" takes the top spot at this week's box office. No word yet on when we can expect the other 9 plagues.

Despite receiving a dismal 28 percent from Rotten Tomatoes, "Exodus: Gods and Kings" takes the number one spot at the box office this weekend bringing in an estimated $24.5 million.

Now, there are several problems with this movie, from the Australian and British men playing Egyptians to the serious lack of emotion in the film, but perhaps the most impressive problem: the anticlimactic parting of the Red Sea.

A critic for IGN said, "What should be the film's most memorable set piece, the parting of the Red Sea, feels underwhelming coming after the ten plagues."

YouTuber Jeremy Jahns said, "It's this underwhelming thing, comparatively speaking, to all the other events that have happened in this movie leading up to the parting of the sea."

Many applauded Ridley Scott's adaptation of the 10 plagues of Egypt, but the critically acclaimed director was criticized by many more for his supposed "white-washing" of the original story. (Video via 20th Century Fox)

While the aesthetics of "Exodus: Gods and Kings" are of course light years ahead of "The Ten Commandments" film from the 1950's, the cast isn't. It's just as white now as it was then.

But Scott's reason for a mostly-white cast is a simple one. He told Variety, "I can't mount a film of this budget, where I have to rely on tax rebates in Spain, and say that my lead actor is Mohammad so-and-so from such-and-such. ... I'm just not going to get it financed. So the question doesn't even come up."

But for all the casting controversy this film has dealt with since the trailer was released, the film doesn't use the cast well, instead relying on stunning visuals effects to try and save it from mediocrity.

As Forbes writer Scott Mendelson puts it, "The film is so emotionally flat, really throughout the entire 150-minute run time, that it feels less like a movie than a handsomely-staged and visually-spectacular book report."

As for the number two spot, Lionsgate's "Hunger Games: Mockingjay" remains in the top three for a fourth consecutive week, bringing in an estimated $13 million and pushing its domestic total to more than $277 million.

And lastly, "The Penguins of Madagascar" takes the number the three spot, bringing in an estimated $7.3 million.

And just barely edging out Chris Rock's new comedy "Top Five," which was carried by less than 1,000 theaters across the country.

As for next week, it's beginning to look a lot like Christmas with the release of the family-friendly retelling of "Annie" and hordes of mystical creatures killing each other. Happy Holidays!