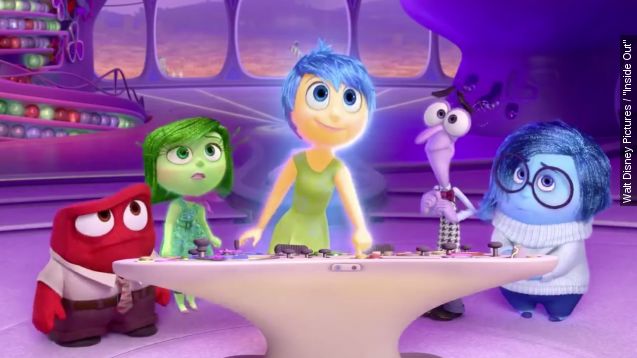 SMS
Box Office Top 3: Dinosaurs Turn Pixar's Record Inside Out
By Jamal Andress
By Jamal Andress
June 21, 2015
Taking the No. 1 spot for the second weekend in a row is "Jurassic World," beating the $90 million push from Pixar's "Inside Out."
SHOW TRANSCRIPT

Have you ever roped a younger relative into seeing a movie just so you could go? Yeah, me neither.

"Can I say that curse word now?" says a character in "Inside Out."

More on that later, but first: the box office king.

"It's a relationship, based on respect," says Chris Pratt's character in "Jurassic World."

Taking the No. 1 spot for the second weekend in a row is "Jurassic World," which brought in $102 million.

As you might have heard, "Jurassic World" had a decent debut last week.

And by decent, of course, I mean the best ever. Chris Pratt and company rode the nostalgia train to a record last weekend, with $208 million in the U.S. and $524 million overseas — both all-time records for a debut.

So what did "Jurassic World" do in its encore weekend? Well, it broke down another record that has been around even longer.

Since 1995 — when the world was introduced to Woody, Buzz and the rest of Andy’s toys — Pixar has been an animation powerhouse. So much so that until now, every film it has released has debuted at No. 1.

Even the bad ones.

Which is tremendous because it's the second biggest debut weekend of any Pixar film behind "Toy Story 3," which brought in $110 million in its opening weekend.

“The last couple years, I think the blooms fell of the rose a little bit, but this one is right in there with the best of the works Pixar has ever done.” Rotten Tomatoes Matt Atchity said.

Critics are gushing over Pixar's latest, and after 180 different reviews, "Inside Out" is pulling a 98 percent on Rotten Tomatoes.

Like many other Pixar films before it, "Inside Out" manages to execute an original concept, and serious star power brings its characters to life. Amy Poehler, Bill Hader, Mindy Kaling, Phyllis Smith and Lewis Black have rarely played more fitting roles. Especially Mr. Black.

And despite all the star power on screen, most critics say the least famous of the group, Phyllis Smith's character Sadness, stole the show. (Video via NBC / "The Office")

"Smith is marvelous at bringing [Sadness] to life … a grandmother-librarian who's never at the center of anything more cultural than a family portrait," Grantland's Wesley Morris said.

Rounding out third in its third week is Melissa McCarthy's "Spy," bringing in an estimated $10 million. "Spy" also finally shakes "San Andreas" out of the top three after The Rock and company's three-week streak.

As for next week, "Family Guy" fans around the world, rejoice.