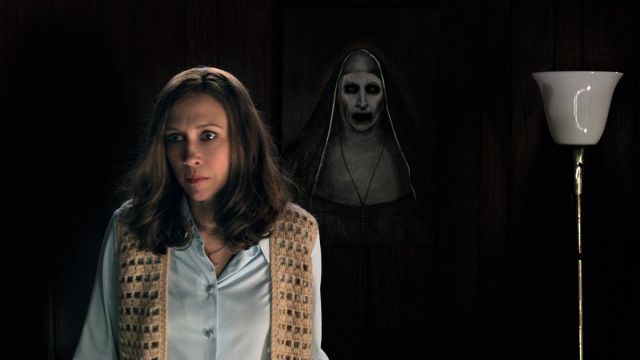 SMS
Box Office Top 3: 'Conjuring 2' Is A Horror Sequel And Doesn't Suck
By Jamal Andress
By Jamal Andress
June 12, 2016
A horror sequel that performs well and has solid reviews is about as rare as actual paranormal activity, but "The Conjuring 2" found the sweet spot.
SHOW TRANSCRIPT

With three new movies out this weekend — as well as plenty of holdover flicks — good old-fashioned horror rises above the fray.

Taking the No. 1 spot on this crowded weekend is "The Conjuring 2," bringing in a solid $40 million in its debut. The $40 million weekend matches the $40 million Warner Bros. spent producing the film, so it's obviously a great start for this horror flick.

A horror sequel that performs well in theaters and has solid reviews is just about as rare as actual paranormal activity. Fortunately for Warner Bros, "The Conjuring 2" found the sweet spot.

"Uhhhm, this movie is scary as s**t," Christy Lemire said.

"It's been a minute since a truly great horror flick hit the scene. With this latest sequel, James Wan has mastered the horror genre," IGN's Max Nicholson said.

With a 75 percent approval rating on Rotten Tomatoes, many are crediting "Furious 7" director James Wan for the frighteningly well-done horror sequel.

Taking the No. 2 spot this weekend is the most expensive new release by far. "Warcraft" brought in an estimated $24 million in its debut with a $160 million production budget — that's a certified flop.

At least it would be if it weren't for China and the international box office. Although Warcraft couldn't get off the ground in the States, it brought in more than $285 million in foreign tickets sales — $156 million of which came from China alone.

Taking the No. 3 spot this week is "Now You See Me 2," bringing in about $23 million. That's not as much as the original, but it's pretty decent for a sequel that doesn't have any superheroes in it.

The original "Now You See Me" brought in just over $29 million in its debut, but by the time it was all over, the magician film had pulled $350 million worldwide from up its sleeve. Hopefully for Lionsgate, the sequel will have similar luck at the box office in the coming weeks.

As for next week, another fish gets "lost" at sea.