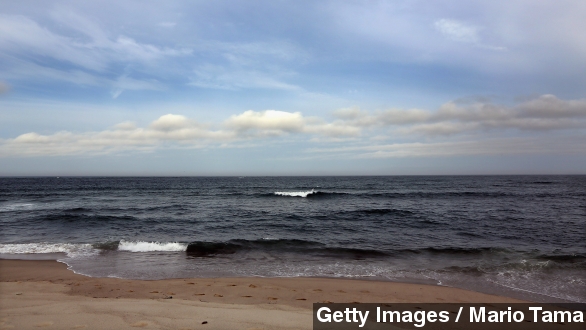 "It's incredible," a woman said.

"Some of the ice is 3-feet thick," the WBZ-TV reporter said.

"I've never seen anything like this before," one father said.

And while WBZ-TV's chief meteorologist called the ice a "once-in-a-generation" event, it probably won't be around for long.

"But this, this nature made ice sculpture, is something to savor," the reporter said.

So, we get it, it's pretty. It sounds cool. But ... it's kind of a pain in the butt for people who want to get their fishin' on.

"It's been like this and no better for the better part of six weeks. I happen to have six kids and they don't run on good intentions, they run on income, so this is not a good thing," one fisherman told WHDH.

Or we can all go into panic mode like a writer for The Real Cape and just assume everyone is doomed.

Seriously, though, don't panic. It seems Elsa's ice magic was only temporary. One Twitter user pointed out the ice is already melting.

Others were astonished it even washed on shore at all, saying they'd never guess it was from Cape Cod and calling it the "South North Pole."

A Cape Cod National Seashore administrator told The Boston Globe chunks like this often float in during the winter, but this year they're more extreme because "there has been no snow melt in between storms."

Hey, but one thing we do know that contributes to snow melt ... warm weather. It's on the way!