Both Sides Push Biden To Talk Immigration Ahead Of SOTU Address 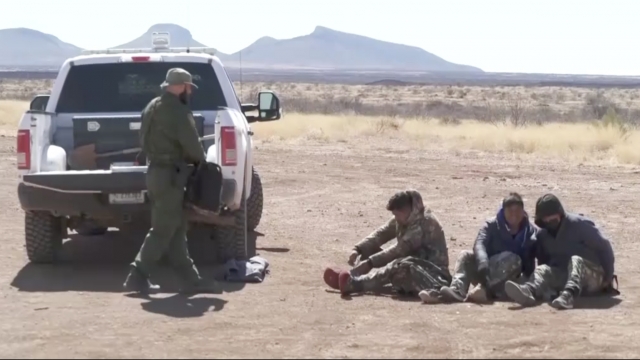 SMS
Both Sides Push Biden To Talk Immigration Ahead Of SOTU Address
By Adi Guajardo
By Adi Guajardo
March 1, 2022
An Arizona-Mexico border resident says migrant apprehension has progressively gotten worse in the last year, and he wants the president to address it.

Ladd's cattle ranch in Cochise County, Arizona is right on the border.

"Thats where majority are coming around,” he said.

As Newsy's Adi Guajardo toured his property, three men tried crossing through and were later detained and processed by border patrol agents.

But first, she learned they came from Puebla, Mexico. One said he has crossed into the U.S. five times and been caught each time, while the other two said they had only crossed once.

Less than 10 minutes later, two more immigrants were loaded into a border patrol vehicle — a 22-year-old and a 23-year-old both coming from Mexico.

U.S. Customs and Border Protection data shows migrant encounters along the southwest border dropped 14% in January compared to December, but overall, encounters more than doubled in 2021 compared to 2020.

NEWSY'S ADI GUAJARDO: If you could have a one-on-one meeting with President Biden, what would you say to him?

Ladd's land is fenced by more than 10 miles of the border wall. He says the 30-foot wall "helps" the situation, but he wants President Biden to beef up security and send a strong message on immigration enforcement.

"It's a crisis because we are creating it by not responding to basic human needs," Pedre De Velasco said.

De Velasco is an attorney and the director with Kino Border Initiative — a humanitarian organization working in Mexico and Arizona with thousands of migrants annually.

He says immigrants are crossing illegally out of desperation, due to policies and immigration courts inundated with cases.

De Velasco wants the president to take action and double down on his promises during the State of the Union and say...

"Enough is enough," De Velasco said. "We are ending Title 42 and resuming the asylum process. "

Title 42 is a public health law implemented by the Trump administration to prevent the spread of COVID-19, but immigration advocates say it prevents people from claiming asylum.

President Biden paused the Trump-era migrant protection protocols, also known as the Remain in Mexico policy, but a lawsuit re-launched the policy.

For now, the future of the Remain in Mexico policy is in the hands of the Supreme Court.