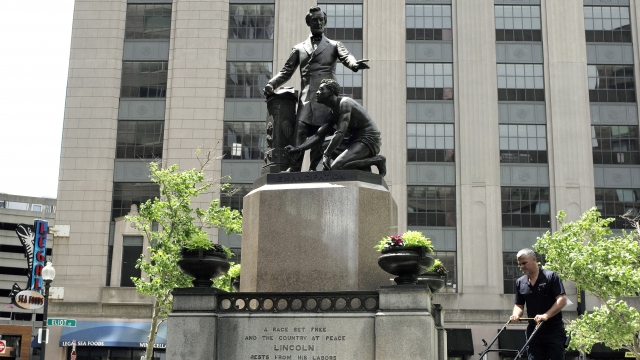 ​The Boston Art Commission voted to get rid of a Lincoln sculpture featuring a freed slave kneeling that critics said demeaned Black people.

The Boston Art Commission voted unanimously on Tuesday to remove the Emancipation Group in Park Square. The statue is a replica of the Emancipation Memorial in Washington, D.C., and both have stood in their respective locations for over 100 years.

The statue is intended to serve as a memorial to Lincoln's emancipation of slaves in the U.S. But critics say it perpetuates an image of subservience and is ultimately demeaning in its portrayal of Black people.

Calls for the statue's removal grew after Boston native Tory Bullock launched a petition last month calling for it to be taken down. Upon the commission's decision, Bullock told CNN: "I just want everyone to know that this is an incredible moment, and I don't want it to be lost on them. This was a digital experience. No one had to march, no one had to risk their lives, and we were able to effect some real change."

Boston Mayor Marty Walsh praised the commission's vote, saying: "After engaging in a public process, it's clear that residents and visitors to Boston have been uncomfortable with this statue, and its reductive representation of the Black man's role in the abolitionist movement."

No date has been set yet for the statue's removal, but the commission said it will figure out how and where to relocate it at future meetings.