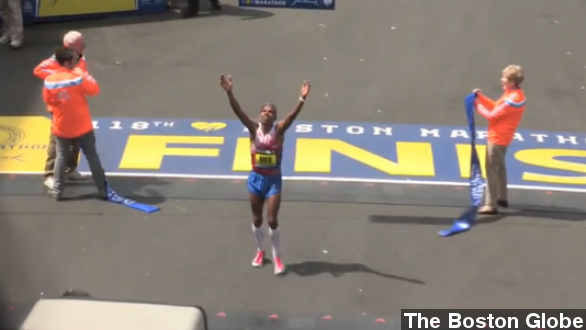 SMS
Just How Unlikely Was Boston Marathon's Winner? Very.
By Kristian Mundahl
By Kristian Mundahl
April 21, 2014
Immigrating from Eritrea as a boy, Meb Keflezighi overcame a rough childhood to become one of the best marathoners in the U.S.
SHOW TRANSCRIPT

On Monday, an American took first place at the Boston Marathon for the first time in 30 years, and you might have heard his name: Meb.

Mebrahtom "Meb" Keflezighi (kuh-flez-kee) crossed the finish line in downtown Boston after two hours and eight minutes, edging out two Kenyan runners in the last mile and making history in more ways than one.

Keflezighi is the race's first champion since last year's bombing killed three race spectators and injured more than 200 others. It also follows two decades of Kenyan dominance in the race.

Since 1991, a Kenyan has won the men’s race nineteen times, including ten in a row from ‘91 to 2000. In 2011, Kenyan Geoffrey Mutai set a world record for fastest marathon time while running in Boston.

And then there’s Keflezighi’s age. He's 38, which, according to The Boston Globe, makes him the oldest victor since "Smiling" Jimmy Henigan crossed the finish line in 1931 and, according to our calculations, makes him more than a decade older than the median age of Boston Marathon winners, which is 27.

But it's Keflezighi’s personal history that shows just what the win in Boston means to the runner.

Meb was born in Eritrea in 1975 during the country’s brutal war for independence with Ethiopia to the south. According to Runner’s World, Keflezighi had "regular encounters with death and dismemberment of his Eritrean friends and neighbors" while growing up.

His father often had to go into hiding to escape imprisonment and certain death at the hands of the Ethiopian military. The family finally left in 1987, settling in San Diego, California and inspiring a young Keflezighi to strive for the best.

After Keflezighi earned the silver medal at the 2004 Athens Olympics, he broke his hip during a 2008 race, failing to qualify for the Beijing team. During that same marathon, his friend and racing partner Ryan Shay died of heart attack.

But Keflezighi overcame those setbacks. In 2009, he became the first American to win the New York City Marathon since 1982, and he wrote a memoir in 2010. He went on to compete in the 2012 Olympics in London, becoming a media favorite due to his inspiring story. (Via Amazon,

Speaking about Keflezighi, fellow runner Deena Kastor says, "Time after time, year after year, Meb has been an inspiration to me. He's an extraordinary person coming out of an extraordinary family." (Via New York Road Runners, Runner's World)