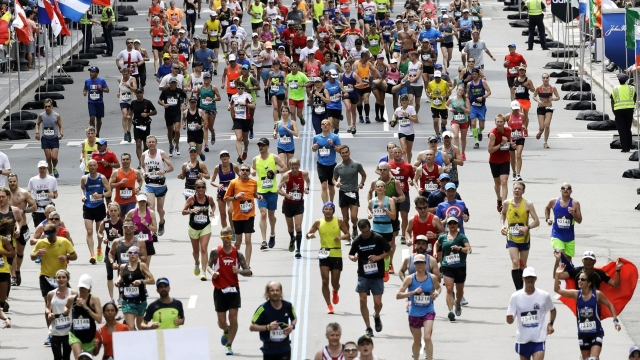 SMS
Boston Marathon Postponed Amid Coronavirus Concerns
By Adam Elrashidi
By Adam Elrashidi
March 13, 2020
Officials postponed the marathon until Sept. 14 after consulting with the Boston Athletic Association and communities along the route.
SHOW TRANSCRIPT

The Boston Marathon is one of the latest sporting events to be suspended amid the coronavirus pandemic. On Friday, Boston Mayor Martin Walsh announced the annual race would be postponed until Sept. 14.

The Boston Marathon attracts thousands of runners and spectators from across the globe. Some people online expressed disappointment over the decision, but nonetheless understood that it was "for the best." Others hoped it wouldn't spoil their chances of running the race sometime in the future.

The race generates roughly $200 million for Boston and is sponsored by some of biggest brands in the world, including Adidas, Amazon and Gatorade. The event also helps to raise millions of dollars for charity. It has never been canceled in its 124-year history, but 2020 marks the first time it won't be held in April.

The mayor said the decision to postpone was made after consulting the Boston Athletic Association and municipalities along the marathon route. He also expressed hope that by September, Boston would be in a "safer place" with regard to the outbreak.

Walsh said, "Our priority right now is making sure the health and safety of the runners, of the fans, of the medical personnel, first responders, residents of the Commonwealth of Massachusetts [and] visitors from around the world."

The Boston Marathon isn't the only race affected by the coronavirus pandemic. Earlier this month, the Tokyo Marathon restricted participation to "elite" athletes, and both the London Marathon and Barcelona Marathon will now be held in October.