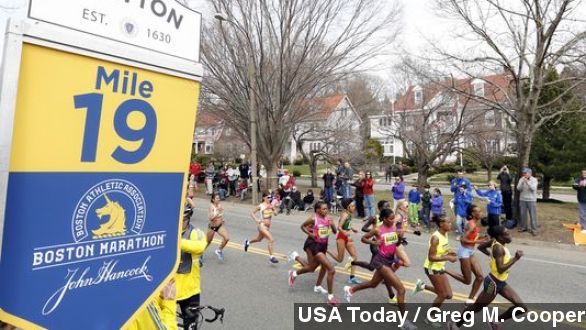 Looking to leave the tragic events of last year behind, some 36,000 runners are taking part in Boston's storied marathon this year.

It's the second largest field in the history of the iconic event — the number of competitors and the 1 million people expected to come cheer them on representing the "Boston Strong" spirit following last year's terror bombings, which killed three people and wounded at least 264 more. (Via Fox News)

Many of the runners are returning to finish the race that was cut short last year by those deadly attacks.

Demi Clark was just crossing the finish line when the two bombs went off. She says even though she might be in tears for the entire 26.2 miles, she has to go back. (Via The Boston Globe)

The White family was also at the finish line when the bombs exploded.

"Mary Jo suffered a broken wrist. Husband Bill lost his leg. Son Kevin has shrapnel all through his body, but that's not stopping him from running this year." (Via CNN)

Others will be running for charities in honor of the lost and wounded victims.

Congresswoman Kyrsten Sinema of Arizona is one of the 102 runners competing on Team MR8, a foundation representing Martin Richard, the8-year-old boy killed in last year's attacks. (Via MSNBC)

And NBC anchor Natalie Morales is also running the marathon for charity. Morales will run with Carmen Acabbo, whose sister Celeste Corcoran lost her legs in the bombings last year.

And of course, there are also the marathon's elite entrants.

ESPN explains: "The elite field is one of the best in history overall. … Nearly every top American marathoner who is healthy will lace up."

Notably absent from this year's race, however, will be the "bandits" — those who run the race without registering.

A writer for The Boston Globe explains these sometimes-costumed athletes have been welcomed intruders and somewhat of a tradition in the marathon. However, with increased security this year, they will be officially banned for the first time.

The Boston Police Department says more than 3,500 police officers, both uniformed and undercover, and some 100 security cameras will be used to monitor this year's race.