Boston Gov.: Marathon May Be 'Safest Place In America' 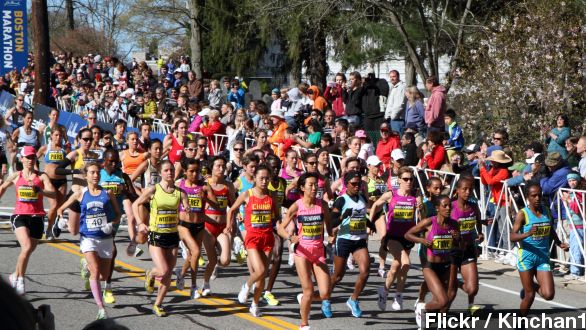 SMS
Boston Gov.: Marathon May Be 'Safest Place In America'

By Matt Moreno
April 20, 2014
The number of police officers at the Boston Marathon will double to about 3,500 after last year's attacks.
SHOW TRANSCRIPT

The annual Boston Marathon begins Monday. And after last year's bombing killed three people and injured over one hundred, organizers are tightening security to make sure something like that doesn't happen again.

"The number of police officers we will have on the course this year will double to 3,500. ... There will be more bomb detection, more cameras and more barriers between the runners and the public." (Via WBZ-TV)

"There will be a heavier police presence — units at checkpoints along the route and several undercover agents securing the area." (Via Time Warner Cable News)

In addition to heightened security, some items are no longer allowed at the marathon, including: backpacks for runners, large signs, glass bottles, costumes and more. (Via Boston Marathon)

While officials are taking extra measures to make sure everyone is safe this marathon, Massachusetts Gov. Deval Patrick told CBS's Face The Nation, they don't want to take the fun out of the race.

"We've tried to strike a balance between enhanced security and preserving the family feel. ... We also don't want to have it kind of like a race through a militarized zone." (Via CBS)

On CBS, Gov. Patrick even said enhanced security could make Boston the safest place in America during the race. It starts Monday morning.