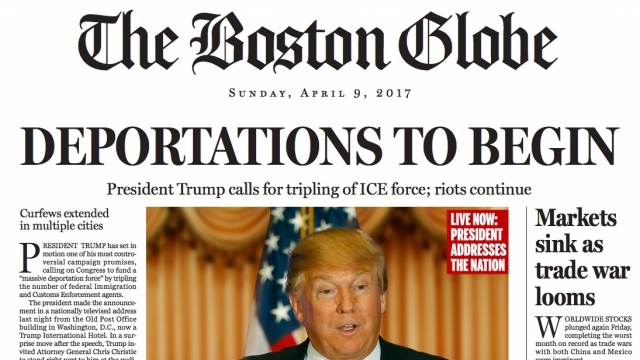 The Globe published a satirical front page Sunday, showing what could happen if Trump wins the presidential election come November.

Almost everything on the page comes from statements Trump's made in the past. The main headline reads: "Deportations to begin."

"They're called illegal immigrants and they're here illegally. They're gonna have to go and come back legally," Trump said on CNN.

A little farther down the page: "US soldiers refuse orders to kill ISIS families."

And, a little farther down, another headline reads: "New libel law targets 'absolute scum' in press."

"I'm going to open up our libel laws so when they write purposely negative and horrible and false articles, we can sue them and win lots of money," Trump said.

An editor's note at the bottom of the page reads, in part: "This is Donald Trump's America. What you read on this page is what might happen if the GOP front-runner can put his ideas into practice, his words into action. Many Americans might find this vision appealing, but the Globe's editorial board finds it deeply troubling."

In a subsequent editorial titled "The GOP must stop Trump," the Globe calls Ted Cruz Trump's toughest opponent for the GOP nomination, and an "equally extreme and perhaps more dangerous" candidate.

In January, the paper endorsed Ohio Gov. John Kasich for the GOP nomination.

Trump currently leads the rest of the GOP field by more than 200 delegates, although several polls have him losing to Hillary Clinton, the Democratic front-runner, by roughly 10 percent in the general election.