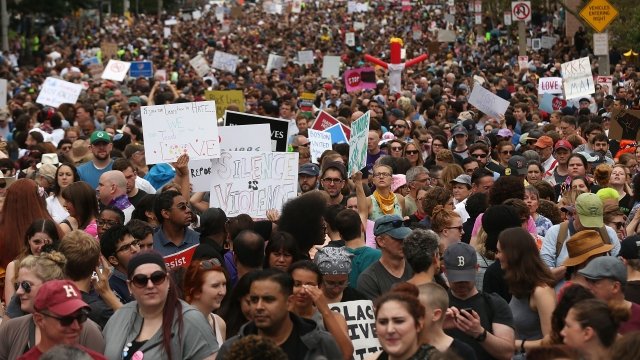 Saturday's high-profile "Free Speech Rally" in Boston disbanded shortly after it was scheduled to begin.

Samson Racioppi, a congressional candidate originally scheduled to speak at the rally, told WCVB the event "kind of fell apart." About 90 minutes after the rally had begun, police declared it "officially over."

As of Saturday afternoon, it was unclear why the rally ended early. But many speculate it had to do with safety concerns. Soon after rally attendees were escorted out, police in riot gear arrived to control the crowds.

And hours before the rally began, thousands of counterprotesters began marching around the city. By noon, police estimated there were at least 15,000 of them, with more joining throughout the day.

Compared to the "Free Speech Rally" — which garnered roughly 50 attendees, according to The Boston Globe — the counterprotests rapidly overtook the city. 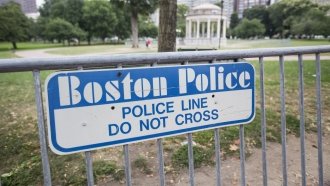 Preparing For Saturday, Boston Refuses To Be The Next Charlottesville

Boston police were prepared for that, but officials didn't want it to happen.

During a public safety press conference on Friday, Mayor Marty Walsh urged people to stay away from the rally. Earlier in the day, the Boston Police Department took to Twitter to ask for "respectful & responsible behavior."

Organizers of the rally said before it began that they just wanted to defend the freedom of speech. They also denounced racism, bigotry and violence.

But speakers and attendees at a Boston Free Speech rally in May had many concerned.

Augustus Invictus, a notable conservative figure and planned speaker, reportedly encouraged people at May's free speech rally to arm themselves for a civil war. Members of some of the so-called "alt-right" groups that rallied in Charlottesville, Virginia, were also in attendance.

As of Saturday afternoon, CNN reported at least eight people were arrested. Despite all that, it's worth noting the event was much more peaceful than the incidents in Charlottesville.