Your Next Package Carrier Could Be A Robotic Dog 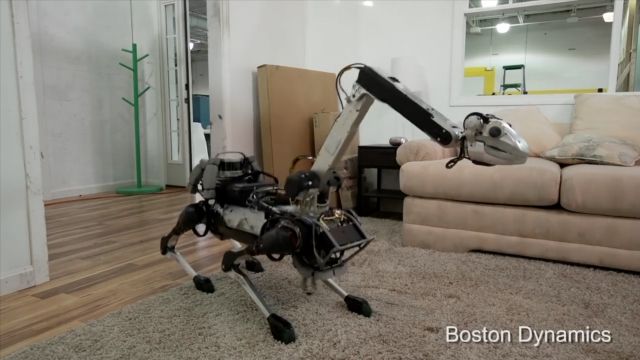 SMS
Your Next Package Carrier Could Be A Robotic Dog
By Lindsey Pulse
By Lindsey Pulse
December 11, 2016
The CEO of Boston Dynamics floated the idea of using robotic hounds to make deliveries.
SHOW TRANSCRIPT

A robot dog could be the next thing delivering your packages.

Google's Boston Dynamics appears to be spitballing real-world uses for its dog, Spot Mini. The company's CEO reportedly floated the idea of using the robotic hound to make deliveries.

SEE MORE: Toyota Made A Tiny Robot To Keep You Company On Your Commute

Spot Mini isn't the first of its kind. The company unveiled its first Spot last year, and since then, the pup has made leaps and bounds as far as what it can do.

Companies like Amazon already have the ability to use drones for deliveries, so who's to say robot dogs can't join the fleet?

In some cases, they might actually be better — Spot Mini's robotic neck and "mouth" could knock on doors, ring a bell or put a package in a specific place.

But before your robots-are-taking-over-the-world panic sets in, the hound still needs human help to perform a lot of its tricks.

Boston Dynamics doesn't currently use machine learning, which would enable the bots to do things without explicit programming.