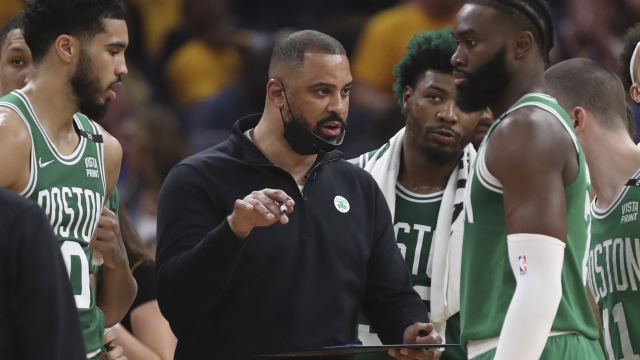 “We go to great lengths ... to run the organization with the central core value of respect and freedom in the workplace from harassment or any unwelcome attention,” Grousbeck said at a news conference a day after the reigning Eastern Conference champions suspended Udoka for the entire 2022-23 season. “This feels very much, to me, like one of a kind. That’s my personal belief. But I’ll have to verify that.”

Neither Grousbeck nor president of basketball operations Brad Stevens would elaborate on the specifics of the violations or the private report that was delivered to the team two days ago. But a person with knowledge of the matter, speaking on the condition of anonymity because the details were not made public, told The Associated Press that it involved an inappropriate relationship with a woman in the organization.

Udoka's multiple violations involved only one woman, a Celtics spokesman said Friday. No one else in the organization is facing discipline, Grousbeck said, adding that the team will be vigilant to make sure that Udoka's behavior doesn't indicate a larger problem.

“I personally don’t believe that they’re a deeper signal,” Grousbeck said. “But we will be — I will be, personally — talking to members of the organization to make sure that that’s the case.”

A first-year coach who's three months removed from a trip to the NBA Finals, Udoka was suspended days before training camp was to open for the Celtics, who are among the favorites to win it all this season. Assistant Joe Mazzulla was elevated to interim coach through June 30, 2023, though the team said it had not decided about Udoka's future beyond then.

Grousbeck said the team learned of the problem earlier this summer and immediately brought in an outside law firm to investigate. A report was issued Wednesday. Grousbeck said he met with Udoka, who expressed “acceptance and appreciation for how this has been handled.”

Grousbeck would not say whether the suspension was unpaid but confirmed that it comes with a “significant financial penalty.”