Boston Braves Its Snowiest Month Ever 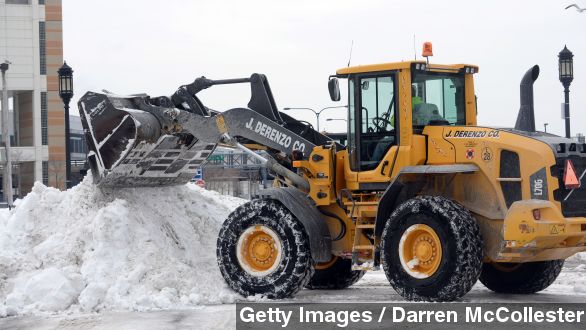 SMS
Boston Braves Its Snowiest Month Ever
By Matt Moreno
By Matt Moreno
February 15, 2015
Most of the northeast U.S. is under a blizzard warning, and Boston is getting hit hard once again. It's the city's seventh snowiest winter on record.
SHOW TRANSCRIPT

Another day, another snowstorm. That's what it's starting to feel like in Boston. A massive blizzard hit the Northeast on Sunday, and Boston, once again, is in the middle of it.

It's making for the snowiest month on record for the city.

The National Weather Service tweeted Saturday night, "It's official, Boston has reached its snowiest month on record with 45.5 total inches." The previous record was 43.3 inches set back in January 2005. Combined, Boston has seen 82.7 inches this winter season, the seventh snowiest winter on record.

"Over on this side, you get a sense of how bad the city has been hit over the past four weeks. Four storms in four weeks, 80 inches of snow. ... I talked to residents who can't remember the last time mass transit was shut down," HLN reporter Cristina Alesci said.

The massive amounts of snow are causing major problems for Boston and other neighboring cities that simply don't have anywhere to put it.

"We've been melting and using snow farms for the last three weeks. Just getting snow there, having them melt it. It's just so difficult to stay on top of it all because it just keeps coming," Boston Mayor Martin Walsh said.

And, as CNN reports, it's also deeply affecting local business, with some reporting losses as much as half of normal revenue.

"All of our baked goods are homemade, fresh every day, so we've had a lot of loss," Lulu's Sweet Shoppe worker Nora Long said.

According to The Weather Channel, an additional three to five inches could hit Boston as soon as Tuesday.