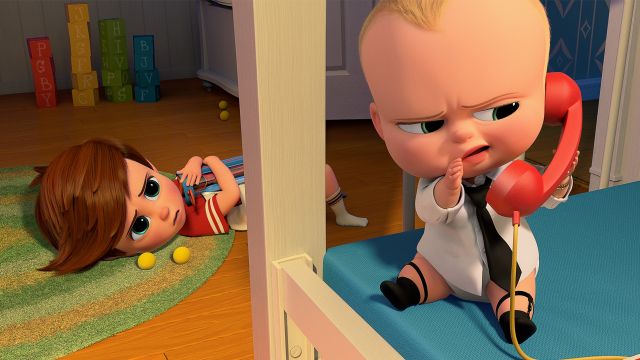 When you're the underdog, it's very important you confront your competition head-on. Taking the No. 1 spot in a photo finish this weekend is "The Boss Baby," bringing in about $49 million and finally knocking "Beauty and the Beast" out of the top spot.

The strong opening weekend is much higher than analysts expected.

As for why, many are crediting Alec Baldwin's recent appearances on "Saturday Night Live" with at least some of the movie's success.

And Baldwin has been playing a corporate bigwig basically his whole career. But for the record, the boss baby is not based on our 45th president.

Taking the No. 2 spot with a $47.5 million weekend is "Beauty and the Beast." The Disney classic has cleaned up over the past three weeks, bringing in more than $395 million domestically and more than $480 million in foreign ticket sales.

Taking the No. 3 spot with an underwhelming debut is "Ghost in the Shell," bringing in an estimated $19 million.

For comparison, Scarlett Johansson's "Lucy" made double that in its debut nearly three years ago, and it was made for about a third of the price of "Ghost in the Shell."

Unlike "Lucy," "Ghost in the Shell" has been somewhat consumed by a "whitewashing" controversy since Scar-Jo was cast. And adding insult to injury, critics have largely panned the film.

"I was not engaged in this; I liked looking at it," Alonso Duralde said on "What the Flick?!"

The one potential saving grace, though, is Japan and China, where "Ghost in the Shell" will debut next weekend. The movie is based on a Japanese anime, and Paramount Pictures is hoping the Chinese and Japanese debuts will have more enthusiastic receptions.

As for next week, Morgan Freeman, Michael Caine and Alan Arkin form the middle-aged Justice League in "Going in Style."