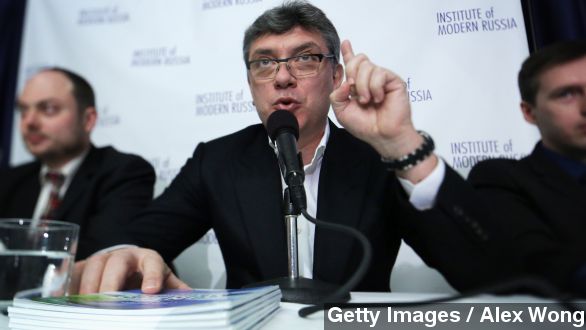 SMS
Boris Nemtsov, Prominent Russian Politician, Shot And Killed
By Christian Bryant
By Christian Bryant
February 27, 2015
The Russian opposition leaders was reportedly gunned down near the Kremlin in Moscow just days ahead of his planned anti-war demonstration.
SHOW TRANSCRIPT

Moscow police are searching for suspects after prominent Russian politician Boris Nemtsov was shot to death near the Kremlin in what's being described as an ambush killing.

Details are still being gathered but local sources report several shots were fired from a car, or from suspects who stepped out of a car, as Nemtsov was walking with a woman on a bridge Friday evening. In this video you can see police surrounding what appears to be a body bag with the Kremlin in the background. It's unclear if there were any other casualties.

Nemtsov was a former deputy prime minister of Russia under President Boris Yeltsin and a well-known politician during the '90s and into the 2000s. More recently, Nemtsov led the RPR-PARNAS — or Republican Party of Russia-People's Freedom Party. (Video via Deutsche Welle)

Nemtsov recently opposed Russian President Vladimir Putin and even accused Putin and his friends of stealing $25 billion in money meant for the Sochi 2014 Winter Olympics preparations.

A spokesman for Putin said the Russian president condemned the killing, calling it a political provocation.

In Nemtsov's last tweet, he urged for Russians to unite at an anti-war demonstration March 1. He was 55 years old.