Boris Johnson Pushes For No Irish Backstop In Brexit Deal 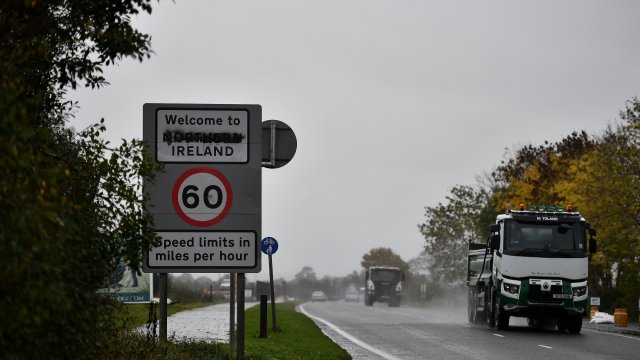 SMS
Boris Johnson Pushes For No Irish Backstop In Brexit Deal
By Austin Kim
By Austin Kim
July 25, 2019
Johnson wants to scrap the Irish backstop that's in the U.K.'s withdrawal agreement. But the EU says it won't renegotiate the deal.
SHOW TRANSCRIPT

If U.K. Prime Minister Boris Johnson wants to guide his country out of the European Union, he'll have to address a major sticking point in the Brexit talks.

"A time limit is not enough," Johnson told Parliament on Thursday. "If an agreement is to be reached, it must be clearly understood that the way to the deal goes by way of the abolition of the backstop."

Johnson is referring to the fallback plan for the Northern Ireland-Ireland border. But to get rid of the backstop, he'd have to renegotiate the withdrawal agreement with the European Union. While the EU said it will not rework this deal, the bloc does not have all the leverage. The EU prefers to see an orderly Brexit, but the U.K. could leave without a deal and throw more uncertainty into the U.K.-EU relationship.

Irish Prime Minister Leo Varadkar says he looks forward to talking about the backstop with Johnson. But Varadkar also dismissed the prospects of a renegotiated withdrawal agreement, something Johnson is adamant about. He told Irish broadcaster RTE the British prime minister needed to "put flesh on the bones" of his Brexit plan. It's worth noting, though, Varadkar has previously said he is willing to listen to alternatives to the backstop.

The proposed backstop is complicated, filled with a history of violence between Ireland and Northern Ireland. Open borders for trade have prevented tensions from flaring up. Essentially, the backstop is a safety net. If the U.K. and EU cannot agree on trade policies by 2020, this plan keeps the U.K. in a single customs union with the EU.

Johnson and some conservatives argue this backstop still ties the U.K. to the EU, defeating the original purpose of leaving the bloc. They also fear it would draw Northern Ireland closer to the union and away from the United Kingdom.

It's unclear when Varadkar and Johnson will meet to discuss the backstop. But Johnson has made it clear: His country is ready to leave the EU on Oct. 31 with or without a deal.