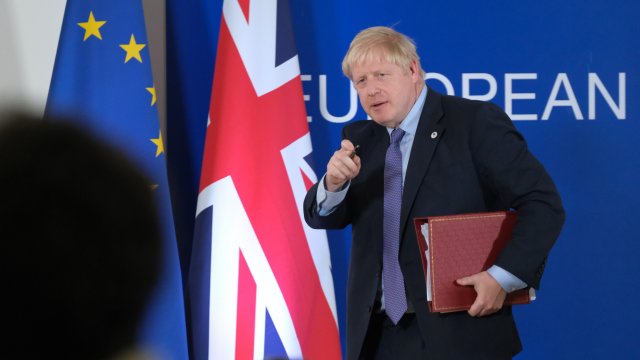 A new arrangement for the U.K. territory of Northern Ireland is at the heart of the new Brexit deal struck between the European Union and the U.K.

Under the new agreement, Northern Ireland is no longer bound to the controversial backstop agreement and will technically leave the EU's customs union with the rest of the country on Brexit day. But it still has to follow E.U. rules and regulations for goods coming to and from Great Britain; which in practice means anything being shipped out of the region will need to go through the E.U. customs process anyway.

That's been a red flag for Northern Ireland's influential Democratic Unionist Party, which has come out against the agreement. A proposal to give Northern Ireland lawmakers a veto vote on the new customs arrangements didn't do enough to sway the DUP, which controls crucial seats in Parliament that could make or break Johnson's deal.

The opposition Labour Party is also marshalling against this deal, arguing it puts the U.K. too far apart from the E.U. Johnson's government downgraded previous commitments to stay close to E.U. regulations; those pledges are no longer part of the legally binding document, but a separate political declaration.

On most other issues, Johnson's deal is similar to the one struck by Johnson's predecessor Theresa May — which was subsequently shot down three times in the U.K. Parliament. The new version of the deal goes before Parliament on Saturday; if it fails there, Johnson is legally required to ask the E.U. for an extension to the Brexit deadline.